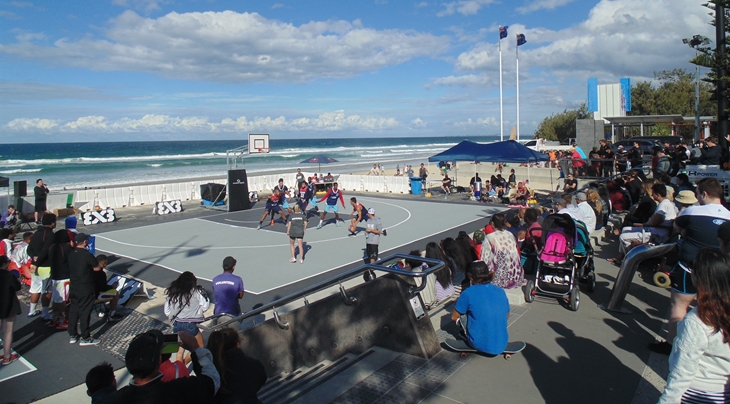 SURFERS PARADISE - The FIBA 3x3 Pacific Championships wrapped up this past weekend in exciting fashion.

Day 2 saw nine teams cut to the top six looking to earn their spot in the medal rounds. Only having dropped one game for the tournament, team Guam were extremely confident coming into the semi-final round. The Tongan team was riding high after their one-point win over Australia's Victorian (VIC) squad in the quarter-final round.

Tonga came out strong, taking it right to the bigger Guam side. After some exciting back and forth action, team Guam proved too strong pulling out the 14-9 victory. This matchup saw the experienced Cook Islands come up against a young NSW side. With a spot in the gold-medal game on the line, neither team were backing down. The crowd was treated to an extremely physical game with some heated back and forth exchanges.

After a gritty 10 minutes of play, NSW secured their spot in the gold-medal round with an 11-6 win. No longer in contention for the gold, each side were determined to not go home empty handed. Both teams came out firing but unfortunately for Tonga, the experience and teamwork of Cook Islands shined through on their way to an 18-9 and the FIBA 3x3 Pacific Bronze Medal. It was time for the game everyone had been waiting for. Both teams had only lost one game to this point, Guam was out for revenge after their 5-10 loss to NSW in the pool games.

The crowd was on the edge of their seat for the entire contest. Neither team was able to hold the lead for very long, each team had their sights set firmly on that gold medal.

1 second left on the clock, Guam has a two-point lead and the ball at the free throw line. They could seal the win right here, but the wind has been picking up as the game goes on. The free throw is up, bounces on the front of the rim and into the hand of a NSW player, he taps it out to his teammate on the three point line, quick release jumper is up, and it's good! But wait, did they get it off in time? The referee confers with the scorer's table, she waves it off, the basket is no good. Check out the full tournament results at 3x3 planet.