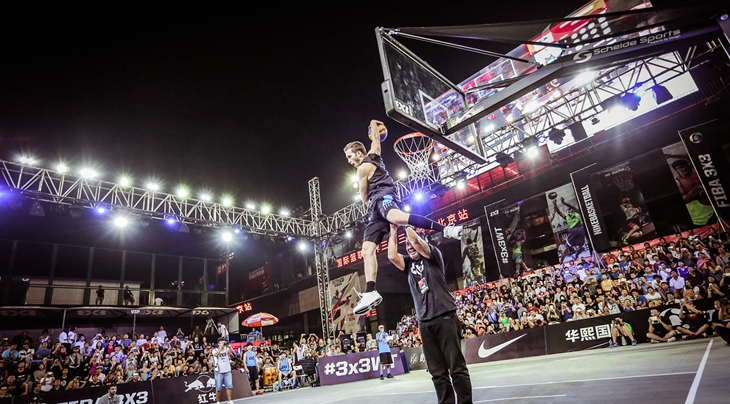 ASTANA (2016 FIBA 3x3 U18 World Championships) - The Dunk Contest is one of the highlights of the FIBA 3x3 U18 World Championships. The best athletes in the competition defy gravity in the qualifier on Friday 3 June (5.35pm local time, GMT+6) and the final on Sunday 5 June (7.15pm local time). We caught up with dunk star Jordan Kilganon to get the participants 5 tips on how to take home the gold medal.

Tip 1: Stick to dunks you know you can make 80% of the time or more. It seems like an obvious tip, but I've seen so many great dunkers lose dunk contests just because they try a dunk they aren't 100% comfortable with, including myself. If you don't make your dunks, you have virtually no chance of winning the contest. It's also very important to not only make your dunks, but to really punch them. Which is another reason you should choose a dunk you are very comfortable with and can make basically every time.

Tip 2: Stick to flashy dunks. 99% of the time, the judges aren't pro dunkers or ex pro dunkers, so they won't be able to understand how spectacular and difficult a super technical dunk is. You have to choose dunks that a general audience will understand. This means no dunks that need a slow motion replay in order for the average person to understand what happened in your dunk. People can easily see and understand dunks like a between the legs, a 360/720, a dunk over people or especially over a car.

Tip 3: You have to be an entertainer. Unfortunately, dunking isn't a real sport yet where you're only judged on the dunk itself. You're swag and interaction with the crowd will almost always get you a better score. We have to put on a show! I learned this very quickly after my first FIBA dunk contest. I decided to do my dunk where I dunk over someone standing on a chair for the first dunk. I got the chair, and stood the person up on the chair right away, and dunked over him. What I should have done, is set the person up with no chair, maybe jump over the person first and jump so high that I couldn't even reach the ball. This implies that the person is too short for how high I'm jumping. So when I pull out the chair and have him stand on it after, the whole crowd is on their feet before I even attempt the dunk. The second thing I messed up on in this contest, is that I'd get up, set the guy up, do the dunk, and go sit back down. You have to get the crowd involved from the beginning, and after you make the dunk, act that even you're impressed that you made the dunk. Even if you've done it a million times. That way, the crowd will think that this was such a hard dunk, that even you're surprised you hit it.

Tip 4: Ask every question possible about the dunk contest you're about to enter. I've also lost dunk contests because the people who organize the contest will assume we know the rules sometimes. Even if they told you all the rules once before, ask again. Even make a list of questions you want to ask for every dunk contest. Every dunk contest is different, so odds are you're going to add more and more questions to that list over time.

Tip 5: Get into a routine/know your body. First, know how much time it takes you to warm up. Get into a gym, find a warm up routine that works for you and try warming up with no dunking at all, then time it. Most dunk contests will let you have maybe 3 to 0 warm up dunks before the contest. If it takes you 10 minutes to warm up, keep bugging who ever is in charge, asking them how much time they think there's left before the contest starts. Second, know what your body needs in terms of nutrition. I personally am known for bringing my own oatmeal and drinking it out a bottle with water aout an hour and a half before the contest. I have a good breakfast, and I make sure I'm up at least 6 hours before the contest.