Disco Domo to represent NBA at FIBA 3x3 All Stars 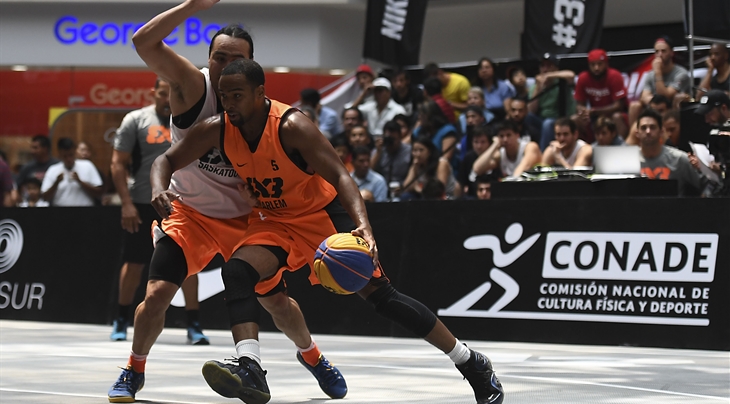 DOHA (FIBA 3x3 All Stars) - We thought we wouldn’t see US star Disco Domo Jones on a 3x3 court this season after his team lost at the buzzer in the final of the World Tour Mexico City Masters and he sustained a hand injury in the summer. But the crafty playmaker put together possibly the best New York team in the history of 3x3 to dominate the Dew NBA 3X Tour and earn a ticket to the FIBA 3x3 All Stars, coming up next on 18 November in Doha, Qatar. We caught up with the 28-year-old, who’s hungrier than the Nutty Professor.

FIBA.com: Domo, after finishing 3rd at the World Tour last year, this was a very frustrating season

Disco Domo Jones: I was pretty sad after that loss in Mexico and then I got hurt. I roughed up a little bit and I’m coming back very very hungry. I’m still learning more about that 3x3 culture. It’s a tough road. Last year we didn’t get a chance to go to Qatar so this is something new for us.

FIBA.com: The NBA organised their first 3x3 tour this year, the Dew NBA 3X. How was it?

DDJ: There were A LOT of competitive teams in the final in Los Angeles. Several NBA players came and paid homage. It was a great event. I interacted with guys like Gary Payton and Baron Davis. Davis actually put up a team, which we beat. It was sweet to defeat the team from Chicago twice since they are the ones who stopped us from representing the US at the FIBA 3x3 World Championships.

FIBA.com: You made a few additions to the team. How much is it improved?

DDJ: There was nothing wrong with the old team but we made a couple of updates. ‘Happy Feet’ aka Kavon Lytch brings a lot of versatility on offense and can defend big time. Anthony Cox is a tough guy as well. This is one of the best teams New York has to offer. We play together all the time so we’ll be ready.

FIBA.com: What’s the goal at the All Stars?

DDJ: We’re here to show that not every event goes by the ranking. No discredit to any of the teams but you gotta recognize the work we’ve put in. We’re gonna go at you whether you’re ranked number one or number 60.

FIBA.com: You’ve talked a lot about Dusan Bulut in previous interviews. How much would it mean to you to finally get a chance to play against him and his team?

DDJ: I actually hanged out with him this summer when he came to New York. I brought him to the iconic courts in New York: Rucker, Dyckman. I definitely hope there’s a chance this time. He’s the number one right now but I will do what I do.