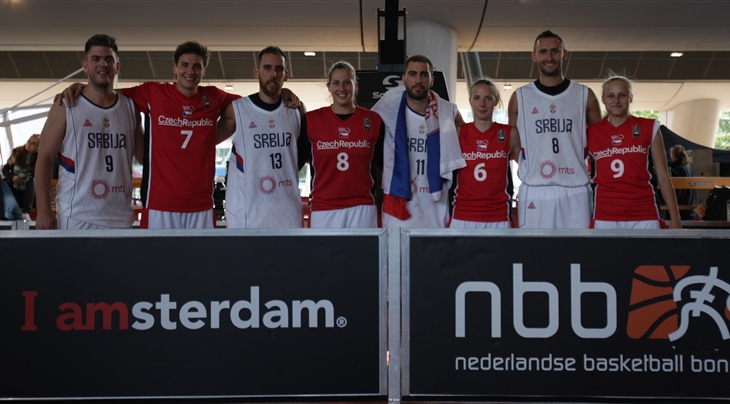 The number one 3x3 player in the world Dusan Domovic Bulut and his Serbian team-mates showed absolutely no mercy for their Dutch hosts in the final, prevailing 22-7.

In the women's category, Olga Maznichenko (Ukraine) once again dominated in the paint. Just like at the 2015 European Games, the 24-year-old won the scoring charts (53 points) but suffered a second defeat in two days at the hands of Czech Republic in a hard-fought final (15-17).

The Czechs went undefeated at the event, thanks to the speedy Kristyna Minarovicova and the do-it-all Romana Stehlikova who finished second and third in scoring in Amsterdam.

In total, 8 teams punched their ticket to the 2016 FIBA 3x3 European Championships who will be held in Bucharest, Romania on 2-4 September. The event featured buzzer-beating wins from Russia and the Slovak Republic, an absurd amount of no-look passes from Belgium's diminutive playmaker Marjorie Carpréaux and - a little more above the rim - a jaw-dropping dunk contest starring Rafal 'Lipek' Lipinski.