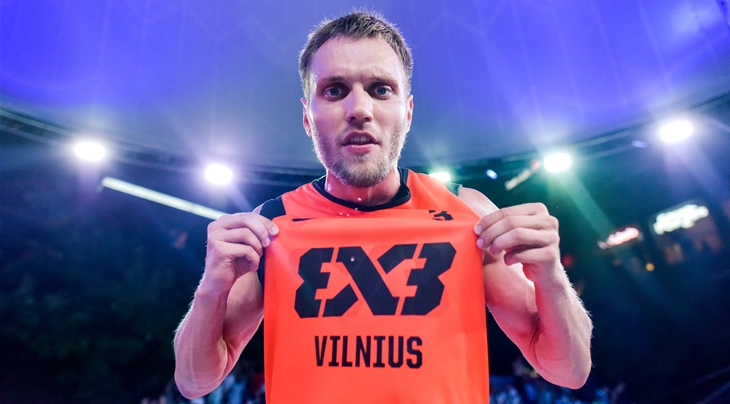 VARESE (3x3) - 3x3 Lithuanian star Ovidijus Varanauskas continues to soar and edge ever closer to achieving star status. We caught up with the 2015 FIBA 3x3 World Tour Lausanne Masters MVP after he nailed the game-winner to send his openjobmetis Varese team to the FIBA Europe Cup Last 16.

He spoke about his life playing professionally in Italy and his objectives to climb up the FIBA 3x3 Individual World Ranking.

On 27 January, the Team Vilnius star added another big shot to his collection.

"The game against AEK was very important for us because it was our ticket to the play-offs," the speedy 24-year-old recalled. "Because of injuries, I was the only point guard on the team and it gave me a lot of responsibility and confidence for this game."

"I didn't have any time-outs left meaning everything that happened was a result of his creativity, fantasy and aggressiveness. I told him to attack the basket. He took his shot and gave us a really important win," he said.

Varanauskas gives credit to his 3x3 career for his success in these situations.

"I just followed my instincts and did what I do best," he offered. "The 3x3 experience helps me mentally to fight for every ball and play tough. It is also a good school to play one-on-one defensively and offensively.

The feeling after hitting the game-winner was amazing. I wanted to prove to myself and the rest of the world  that I can take my responsibilities and deliver.- Varanauskas

It has been a breakthrough season for Varanauskas who was a late addition to Italian League powerhouse Varese and earned praise from the coaching staff.

"We were looking for a very aggressive playmaker who makes us better on both ends of the floor. We liked him because he was young and very enthusiastic," Moretti explained.

He brings 3x3 fundamentals to our team like mental toughness, one-on-one abilities and 'scoring mentality'. We are happy we found a competitor with such a positive attitude. - Moretti on Varanauskas

Just one week after his heroics, Varanauskas shined again in FIBA Europe Cup action, scoring 12 points and dishing out 4 assists in leading his team to victory against magnofit Gussing Knights.

The self-confessed lover of classic cars now hopes to continue his stay in the country of Ferrari and already has his eyes set on the green flag of the FIBA 3x3 World Tour season.

"Italy was always my dream country because the league is one of the strongest in Europe and the life conditions are just perfect here," Varanauskas said. "My goals for 2016 are to stay healthy, earn the respect of my peers and play for more than one year here in Italy.

Regarding 3x3, the objective is to reach the Top 10 in the Ranking. - Varanauskas

Varanauskas currently ranks 49th in the world. As Lithuania failed to qualify for the 2016 FIBA 3x3 World Championships, the Vilnius native is set to make noise in 3x3's pro circuit - the FIBA 3x3 World Tour - to continue his rise to 3x3 stardom.