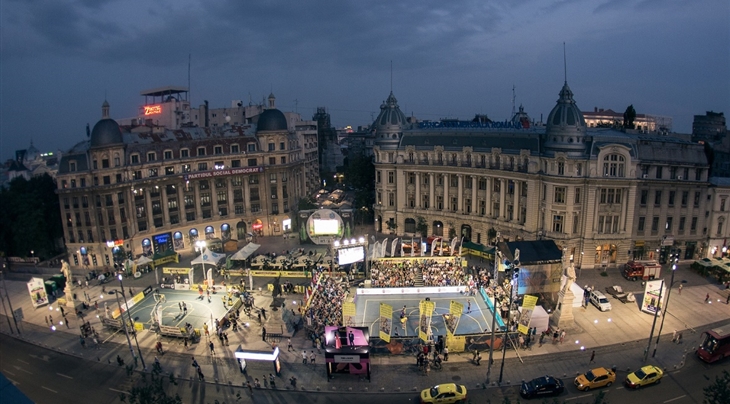 Archrivals Novi Sad Al Wahda and Ljubljana and World Tour teams from outside of Europe such as NY Harlem (USA), Sao Paulo (BRA) and Winnipeg (CAN) will arrive in Bucharest with one goal in mind: the qualification for the FIBA 3x3 World Tour Debrecen Masters on 7-8 September.

The seeding brought to light some interesting matchups in the pool phase. In Pool A, the number one team in the world, Novi Sad Al Wahda will face Team Bucharest and Scoala Veche, another top Romanian team that dominated the national 3x3 season. Last but not least, Che Bar Pristina from Kosovo are coming back after a great run last year in Bucharest, when they reached the quarter-finals.

Ljubljana and Winnipeg are the favourites in Pool B in front of two more Romanian teams, Choco Loco Brasov and Bucharest Littles. The latter is none other than Romania’s U18 National Team that qualified earlier this summer for the FIBA U18 3x3 European Championships (which will also be held in Debrecen, on 9-11 September).

After finishing as runner-ups at the Mexico City Masters, NY Harlem are seeking new ways to qualify for the World Tour Final and are coming to Bucharest with high expectations. They will face in Pool C the tough Serbian team Master Zemun, Stiinta Bucharest and Gap Amstetten from Austria.

Sao Paulo has been a force in South America the last couple of years and will face some fierce competition in Pool D against some solid teams from Eastern Europe: St. Petersburg from Russia, Old Eagle Tbilisi from Georgia and Eco Romari from Bosnia, who just reached the semi-finals of the Prague Masters.

Both finalists of the tournament will qualify for the Debrecen Masters. The winners will get 4,000 USD prize money, while the runner-ups will be rewarded with 1,000 USD.

The Bucharest Challenger come just three weeks ahead of the FIBA 3x3 European Championships, which will be hosted in the Romanian capital city as well on 2-4 September. Both tournaments will be organised by Romanian promoter Sport Arena.