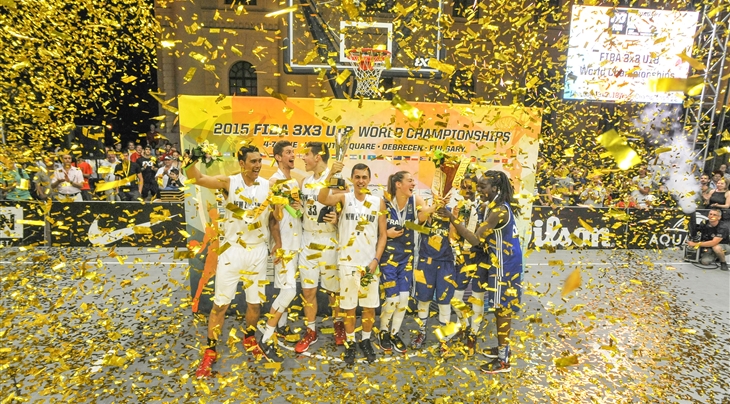 News broke that the mighty Tai Wynyard will return for the Kiwis to defend his crown but it will take yet another MVP performance from the big man, just to get out of the pools. Pool D is the only group where all five teams played at this level last year, including two other teams that cracked the top 10 (Spain fourth and Brazil 10th). Hungary and the Philippines also provided tons of highlights in 2015. This pool should be fun to watch.

The 20 men's and 20 women's teams are divided in four pools of five and seeded based on the FIBA 3x3 Federation Ranking, where national federations are ranked according to the aggregate ranking points tallied by their top 100 nationals in the category.

Every team will play against the other four in its respective pool, with just the top two progressing to the quarter-finals and then playing knock-out games all the way to the final.

On top of the men's and women's team events, there will be more medal opportunities with the three individual contests: the Dunk, Shoot-Out and Skills contests.

All games and contests will be available on FIBA3x3’s official YouTube channel.

Pool B should be exciting too with two of the favourites, 2015 silver medallists Argentina and reigning U18 European champs Turkey. Andorra and Georgia are back in the event after a disappointing campaign last year (18th and 20th respectively). Last but not least, China is back in the tournament after finishing sixth in 2013.

The Kazakh hosts will have to deal with several contenders in Pool C, including Qatar that features the number one U18 3x3 player in the world, Nedim Muslic, but also Romania and Italy who both finished seventh last year, at the U18 World and U18 European Championships respectively. Indonesia complete the pool.

Pool A will be wide open with just two teams who made the event last year (Uruguay 12th, Egypt 14th). Belgium finished sixth at the U18 European Championships in 2015. Netherlands and Slovenia make their return to the men’s event after a four-year absence. In the women's tournament, reigning champs France avoided all their main rivals, with the notable exception of China, fifth in last year's edition. For the rest, Andorra finished 24th in 2015, Tunisia did not qualify last season and the United Arab Emirates make their first-ever appearance at the FIBA 3x3 U18 World Championships.

How entertaining is Pool A? All five teams played at the event last year, including 4 (!) who made the Top 10 (Hungary third, Israel fourth, Germany eighth and Czech Republic 10th). The pool will feature the two best 3x3 players in this category: Veronika Kanyasi (#1, Hungary) and Yaara Yichkazi (#2, Israel). Good luck to Venezuela, the 5th team in the pool.

Pool B will be one to watch too with the only two nations that made the quarter-finals in all four previous editions (USA and Italy). Netherlands and Poland flashed some highlights last year (ninth and 15th respectively). The Kazakh hosts will need some serious support from their local fans to advance to the quarter-finals.

Last but not least, Pool D will be wide open with four teams who finished 11th to 18th in 2015 (Spain 11th, New Zealand 12th, Egypt 16th and Turkey 18th). Spain has to be a special contender because all four players of the team that finished fifth at the European Championships last season are back for another campaign. Keep an eye on Lucia Alonso, who won a medal in the shoot-out contest both at the U18 World (silver) and U18 European (bronze) Championships last year. Guatemala will complete the pool.