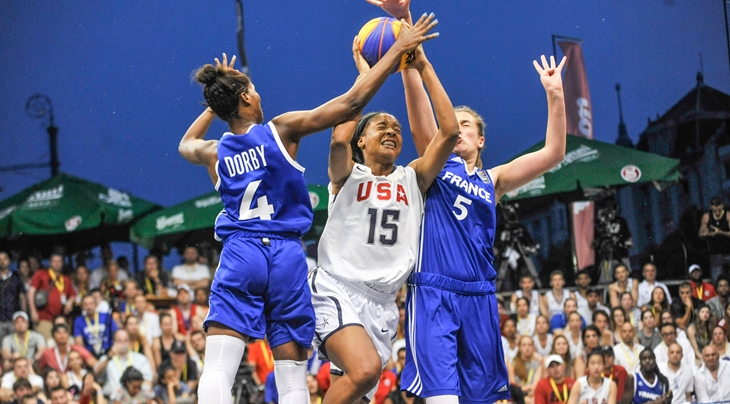 Not the same household names that helped them stun USA last year but a great collection of talents who already made their pro basketball debut in France. Keep an eye on twin towers Sarah Shematsi (1.84m) and Astou Gaye (1.87m), who play together in Toulouse the rest of the year.

After shining as an X-Factor off the bench last year at the U18 World Championships (bronze) and U18 European Championships (gold), Veronika Kányási is back with a lot more responsibilities this season. Can the new #1 player in the world (U18 category) live up to her rank and lead a young team (including two 16-year-olds) to victory?

Israel had a Cinderella run last year, reaching the semi-finals with a team that featured just one player over 1.70m. Just two months later, they struck bronze at the U18 European Championships. Lior Halevi and Eden Rotberg are back from this successful campaign. While the team will be a little taller this year, the winning recipe will remain suffocating defense and long-range accuracy.

Simply put, the only other team not named USA to reach the quarter-finals in all 4 editions. This year again, the roster will feature four girls, who have shined in youth categories, including the towering Elena Castello and the speedy Anna Togliani.

USA will be the team to beat in Astana considering their roster, including the best-ranked basketball player in America (Megan Walker), the tallest player at the tournament (Sidney Cooks, 1.93m) and the best shooter since Katniss Everdeen (Amber Ramirez).

Argentina came real close to keeping their U18 crown last year, only losing in the final against New Zealand. #4 player in the world Jorge Quercetti is the only player returning this season but the supporting cast - including promising big man Lautaro Berra - makes the Albiceleste a main title contender once again.

The Philippines will make their first-ever appearance at the event without Kobe Paras. To bridge the huge gap, the Asian powerhouse called up two players who have recently shined in youth categories, playmaker Theo Flores and the promising Joshua Sinclair, who already ranks 19th in the world in U18 category after an eye-catching performance at the 2015 FIBA 3x3 World Tour.

Spain reached the semi-finals in 2015 (losing to eventual winners New Zealand) and cracked the Top 10 in all three appearances. This year's squad features players from the most prestigious basketball academies in Spain. Keep an eye on FC Barcelona rising star Aleix Font.

Turkey never really impressed at the U18 World Championships but had a breakthrough last year by winning the U18 European Championships. Their one-two punch of Türkay Barutçuoğlu and Tanalp Şengün is back and three of team members play together the rest of the season. Can Turkey finally shine at world level?