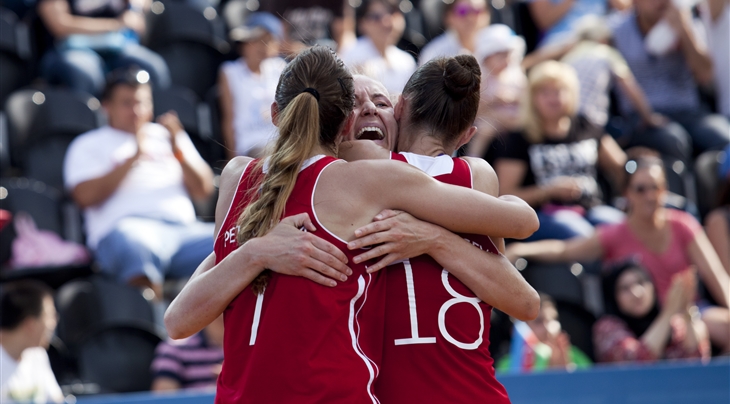 1.    STAR PLAYER: Angelo Tsagarakis took the 3x3 professional circuit - the FIBA 3x3 World Tour - by storm at the Prague Masters last year. "The Tsar" can get any crowd on its feet with his sick cross-overs and gaudy passes. He puts on the French 3x3 national team jersey for the first time after missing the 2012 FIBA 3x3 World Championships at the very last minute due to injury. In other terms: he's HUNGRY.

2.    PAST WINNERS, PART 1: They are the reigning champs. Romania's men made a whole nation proud back in 2014 when they beat the best teams in the world one by one en route to the title at the 2014 FIBA 3x3 European Championships. Unfortunately the champs will have to do without their talismanic leader Angel Santana, who suffered an injury earlier this week.

3.    PAST WINNERS, PART 2: Lucky French fans who get to see both reigning champs at the same qualifying tournament. Russia's women have been dominating 3x3 basketball for the last two years with back-to-back wins at the 2014 FIBA 3x3 European Championships and at the 3x3 event of the 2015 European Games. Some faces have changed but Tatiana Vidmer is back. She's tall (1.91m), she's a fighter, she's basically the 3x3 version of Game of Thrones' Brienne of Tarth.

4.    LEGEND: Big man Amit Tamir has had one of the most decorated basketball career in Israel, with no less than 4 Eurobasket appearances.  He's also been the face of 3x3 and even led the country to the semi-finals of the 2012 FIBA 3x3 World Championships. At 36, does he still have the legs to posterize the young blood?

6.    HOSTS: The two French teams arrive with a lot of hype. The women's national team brings back Perrine Le Leuch who struck silver at the 2012 FIBA 3x3 World Championships and a trio of young players 23 and younger. French women have won the last two editions of the 3x3 U18 World Championships and now they're looking at the senior trophies. The men also won silver in Athens in 2012 and - since then - did not feature in any big 3x3 international team competitions. We have spoken of Tsagarkis but don't blink when Charles Bronchard steps on the court. His nickname is "The Undertaker"...

7.    BROTHERS: The Rduch brothers (Poland) arrived on the 3x3 pro circuit in 2014 but really made a name for themselves last season when they knocked out some big names - including Team Paris, who starred 3 players from the 3x3 French national team interestingly - and reached the FIBA 3x3 World Tour Final in Abu Dhabi. Szymon - 26 - can shoot from deep and dunk on people and is definitely one to watch in Poitiers.

8.    HIGHLIGHT MACHINE: Doing a Top 10 of the tournament should not be a problem with the amount of talent in Poitiers. Keep an eye on Terry Deroover who has more handles than Uncle Drew.

9.    GRADUATION: 25-year-old Alice Quarta won 2 medals for Italy at university level at the 2012 and 2014 FISU 3x3 World University Championships. Now is time for her to lead a team that has never done better than 20th overall at a senior international FIBA 3x3 tournament.

10.    VIDEOS: Every single game will be livestreamed on youtube.com/FIBA3x3 and on facebook.com/FIBA3x3. No Kyle Montgomery this time but we will also get you a Top 5 of the event, mixtapes of the top players and highlights of the finals. Get the pop corn ready.