Wukesong refresh memories on Day 1 at the Beijing Masters 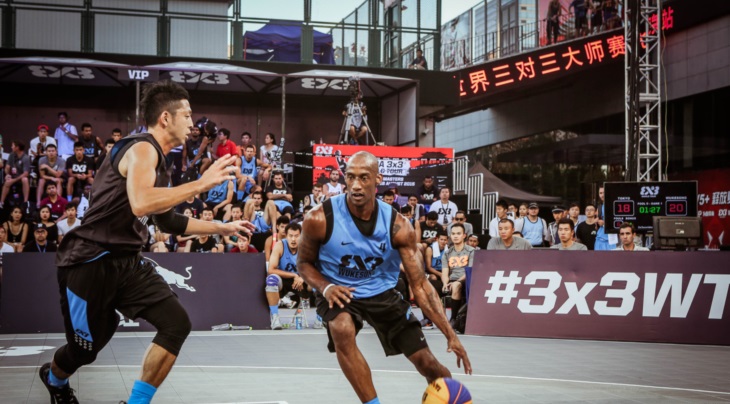 BEIJING (2015 FIBA 3x3 World Tour) – It felt like déjà vu in Wukesong Hi-Park, a park located just outside the basketball venue of the 2008 Beijing Olympic Games and entirely dedicated to the game. Team Wukesong star Chris Reaves shined, scoring in all sorts of ways and finishing with 18 points.

It definitely felt like a sequel of last year as Chris Reaves’ squad defeated Japanese star Tomoya Ochiai again. Wukesong had won by just one point at the buzzer in 2014. It was another nail-biter and probably the game of the day, which the Chinese team won by just two points.

Reaves was sensational but it was another US-born player who topped all scorers on Day 1. The massive Malcolm Battles span his way into 23 points, including a stunning 17 against Jakarta (INA). However Battles’ 120 kilos were not enough to compete with the impressive Team Doha (QAT).

All three teams who already played at the World Tour this year (in Manila) had a quiet day on Saturday, recording two comfortable wins.

Team Ljubljana was the most impressive team on Day 1. The 2013 World Tour winners conceded less than 10 points in both games against New Taipei (TPE) and Jinan (CHN). After their disappointing quarter-finals loss at the Manila Masters, former number one 3x3 player in the world Blaz ‘Birdman’ Cresnar promised a return, “some monster blocks and some big dunks” and he was a man of his word on Saturday.

Games will be available live as of the semi-finals (18.30 local time) on FIBA 3x3's official YouTube channel.

Chinese dunker Pu La impressed at the Red Bull Dunk Contest Qualifier, with a good-looking 360 but will he be a match for YouTube sensation Justin ‘Mission Impossible’ Kilganon?