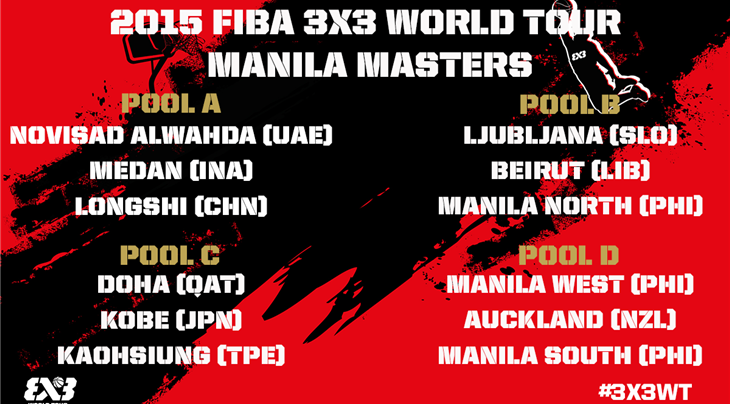 The squad featuring the number one 3x3 player in the Philippines, Terrence Romeo, and fellow PBA (Philippines Basketball Association) players KG Canaleta, Rey Guevarra and John Aldrech Ramos will start the competition in Pool D with the familiar faces of Auckland (NZL) and Manila South (PHI).

Manila West played with fire last year in the quarter-finals against Auckland, getting into foul trouble and trailing early before closing the deal in the closing minutes. The athletic Patrich Bolstad who led the event in points per game last year is back with the addition of sharpshooting Karl Noyer to torment Filipino fans again. The last team in the pool is another Filipino team, Manila South, featuring the winners of an U18 competition. Last season, the champions of the same event created a big upset by qualifying to the quarter-finals, showing that no team should be underestimated at the World Tour.

The seeding is conducted automatically according to the 3x3 individual World ranking (of the three best players from each team). According to the regulations, the number four seed meets the number five and number twelve seeds in Pool D.

A notable change at the World Tour is the new possibility for teams coming from anywhere in the world to make it to as many Masters as possible. This is how reigning champs and number one seed Team Novi Sad Al Wahda (UAE) earned their ticket to Manila. Dusan Domovic Bulut's team will face Indonesian side Medan in Pool A and an intriguing Chinese squad from Longshi which features four professional CBA (Chinese Basketball Association) players.

Last year's Manila finalists Team Doha are back in the Philippines (in Pool C), with their iconic leader Yaseen Musa and three new additions including former NBA second-round pick Tanguy Alban. Team Kobe left the Manila Masters early last year (losing against Doha!) after coming to the event with just three players and return to the competition with a strong squad, featuring the spectacular pair of Devaughn Washington and Nyika Williams. Also in the pool, a young (21-year-old average). Also in the pool, a young (21-year-old average) Kaohsiung team from Chinese Taipei.

For those not attending the games in Robinsons Place shopping mall, pool games will start at 14.10 local time (GMT+8) on Saturday live on FIBA 3x3's official YouTube channel. The top-two placed teams from each pool  advance to a standard knock-out round which starts at the quarter-finals stage, from 13.45 local time on Sunday.