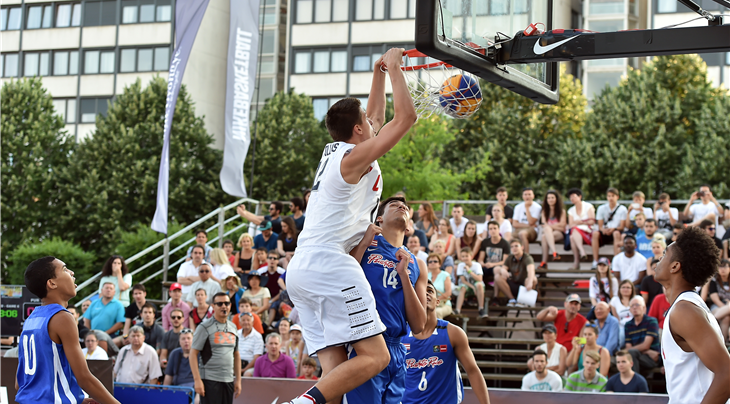 The speedy Payton Pritchard was impressive on Day 1 leading all US men with 17 points. USA had two convincing wins over Puerto Rico (21-4) and Georgia (19-15) despite missing the injured Jalek Felton, who is expected to play on Day 2. Things did not go as smoothly for the women’s team on their debut as they were pushed to overtime by Switzerland (16-14). Arike Ogunbowale’s team recovered nicely against Romania for a much more comfortable win (21-6).

With two games in the bag for each team, a total of 7 teams remained undefeated in the men’s tournament after an exciting Day One.

Russia and Poland had a clean record in a competitive Pool A. Despite unlimited support from a massive crowd, the Hungarian hosts lost both games, including a thriller against the Philippines. Kobe Paras was huge for the Asian team, scoring a tournament-high 24 points on Day One.

The 2014 Youth Olympic winners Lithuania and Romania won back-to-back games in Pool B.

Killian Tillie was unstoppable against New Zealand and Brazil (19-14 twice) and led France to first place. They were the only team without a loss in Pool C.

Spain won a very close game against Argentina to join USA as the number one team in Pool D.

In the women’s tournament, Hungary, Spain and Israel got to a host start in Pool A.

Together with USA, Italy are the only two teams with two wins in Pool C.

Netherlands showed some nerves in Pool D, staying undefeated despite two close games, against Belgium (16-12) and in an overtime success over Czech Republic (15-14).