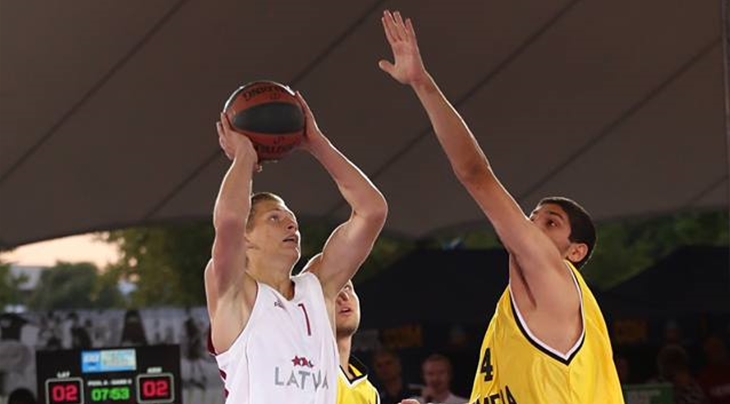 We present to you those, who were the most successful in both the women's and men's side of the draw.

Total points
Ana Ferariu is the leading scorer on day one in the women's competition, after scoring eight and five points for Romania against Estonia and Hungary respectively. This also means she scored more than half of her team's points (13/22).

Ferariu is followed by the quartet of Maria Adashchyk and Anastasiya Sushchyk of Belarus, Germany's Lara Müller and Lithuania's Ramune Vainoraite who all summoned a score of 11 over two games.

Single-game highs
Italy's Carlotta Gianolla and Spain's Paula Ginzo share this personal accolade thanks to their 9-point tallies against Slovakia and Belgium respectively.

Long range shooting
A total of five players have netted three shots from outside the two-point line. Those are Anastasiya Sushchyk (BLR) , Ana Ferariu (ROU), Lara Müller (GER), Myrthe den Heeten (NED) and Ine Vanderhoydonks (BEL). Interestingly, none of them is a finalist at the shootout on Saturday.

Total points
Latvian guard Toms Upe is the undisputed top-scorer of day 1 at the U18 European Championship after racking up 14 points of his team's 15 points in Latvia's first outing against Armenia and following up with seven points in the loss against Italy.

The duo of Riahi Sabri from Belgium and Italian star Daniel Alexander Perez both harvested 17 points and are tied for second spot.

Single-game highs
It comes as no surprise that Upe's 14-point-outing against Armenia is the highest score of day 1.

A little more surprising might be the 13 points that Perez dropped on Belgium, although the explosive guard could not prevent his team from falling 16-18 in that outing.

The trio of Lucien Schmikale from Germany, Riahi Sabri of Belgium and Tom Sapir from Israel registered 10 points in a single game, sharing third spot in this category.

Long range shooting
Nobody was as successful from outside as Tom Sapir, as the Israel star tallied five two-pointers.