Turner tuning up for a critical time 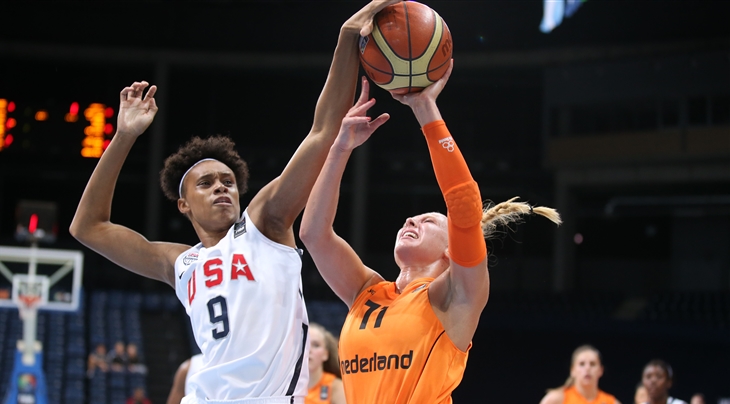 SOUTH BEND (NCAA/2015 FIBA U19 Women's World Championship) - It's all systems go for Brianna Turner who has already scooped the ACC Freshman of the Year award and is now chasing NCAA title success with Notre Dame.

For the 20th consecutive year, the Fighting Irish have earned a berth in the NCAA Women's Basketball Championship, having clinched the Atlantic Coast Conference's automatic berth by winning a second consecutive ACC Championship title.

The contributions of Turner have also helped Notre Dame to secure first seed status in the NCAA Championship's Oklahoma City Region for the fourth consecutive year and fifth time in programme history, with their campaign continuing against 16th-seeded Big Sky Conference champion Montana.

"I'm really enjoying it and I'm learning so much."

Aside from trying to revel in a bit of March Madness, the month of July could also be pivotal for the forward, since she is potentially on course to head to Russia and make a return to the FIBA U19 Women’s World Championship (18-26 July), having been crowned a winner at the event in Klaipeda two years ago.

"My memories of Lithuania was that everything was an experience, even just traveling there," recalled Turner.

"We stopped in the Canary Islands and that was really nice to have a tournament there and to get to play against other teams.

"It really helped us to get ready for Lithuania and overall, it was a really great experience.

I've never been to Russia, so that in itself would be pretty awesome. - Turner

"As well as just experiencing the atmosphere surrounding the tournament again and being able to compare it to my first time."

With A'Ja Wilson also looking on course for a return ticket to the tournament, the pair would join a very exclusive club - since USA Basketball had never had repeat U19 athletes until last time around in the shape of Alexis Jones, Breanna Stewart and Morgan Tuck.

Interestingly, Turner also played at U17 level in Amsterdam in 2012 and competed at the 3x3 FIBA U18 World Championships in 2012 and 2013- something which helped feed her appetite to experience basketball around the globe.

She stated: "I really like 3x3, because you really get to interact with other countries, other players more.

"I think it's really cool how the set-up is.

"I literally have friends from Australia, Argentina and all different countries.

I think 3x3 really feels like more of a community atmosphere than 5-on-5. - Turner

With positive attention looking like being continually channelled her way, the teenager is determined to keep her feet on the ground and keep making her parents proud - as she has done ever since picking up a basketball when little more than knee high.

"It was pretty much a no brainer and I was playing YMCA basketball when I was just five-years-old and I’ve been playing ever since then," said Turner.

"My parents have been such great influences on me because they both played college basketball. They helped me in the college process.

Remaining in the spotlight is of course going to require hard work and application, with Turner eager to make the most of her skills and to continue her basketball education.

I think I'm a good shot blocker and getting going defensively really helps me get going offensively. - Turner

"My game is really defensively oriented," she confirmed.

"However right now, I really want to focus on developing my mid-range jumper."

That will be music not only to the ears of those Fighting Irish fans looking for her to inspire her team in coming weeks, but also her country who could benefit from having an even more skilled Turner on board when they defend their U19 title in Chekhov.