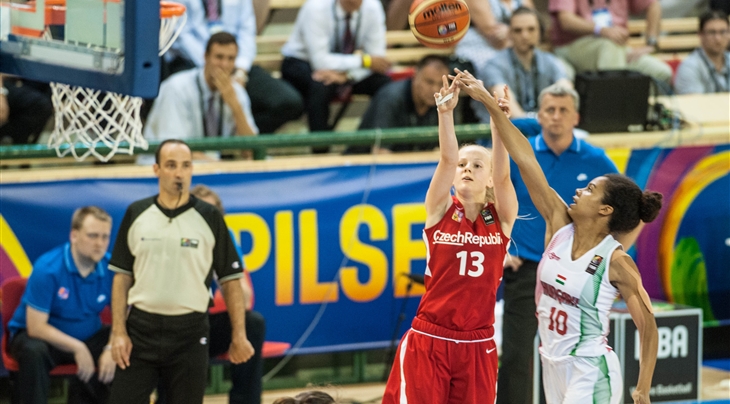 DEBRECEN (3x3) - The FIBA 3x3 U18 World Championships is where a lot of players have made a name for themselves. WNBA player Astou Ndour won the 2011 edition with Spain, NCAA sensation Brianna Turner helped the US tiriumph in 2012 and Spanish rising star Angela Salvadores won a gold medal for Spain in 2013 (at the skills contest). We look at the 10 players who could well be the stars of tomorrow in 3x3 and basketball in general. One rule: just one player per country!

Nina Aho (Hungary)
The speedy Aho already represented Hungary numerous times, including an impressive 4th place at the 2014 Youth Olympic Games (YOG). The 1.77m has played numerous 3x3 tournaments since then and accumulated so many ranking points that she now stands as the number one 3x3 U18 woman in the world. The home-court advantage in Debrecen might be just the difference to earn a medal this time around.

Lucia Alonso (Spain)
Alonso comes back to Debrecen for the second time in two years, after leading Spain to bronze at the U16 European Championship. She impressed with her floor general abilities in Hungary (7th in assists) and her energy and character on the court. Unsurprisingly, her hometown is called Leon.

Kali Benavente (Guam)
She only turned 17 two months ago and still she is probably the most seasoned veteran of the competition. Except the 2012 edition, the diminutive (1.68m) Benavente has played in every FIBA 3x3 U18 World Championships, including the first-ever event in 2011 in Rimini, Italy. She was only 13 at the time.

Lisa Berkani (France)
The French dragster caught our eye at the FIBA U17 World Championship last year, where she finished the event in the Top 30 in scoring. After spending last season learning the ropes under the tutelage of basketball star Céline Dumerc at Bourges Basket, Berkani may be one of the stars in Hungary.

Janis Boonstra (Netherlands)
Finally a player over 1.80m on this list! The athletic Boonstra (1.83m) finished the U18 European Championship in the Top 10 in scoring last season and had a memorable YOG experience, leading Netherlands to a fantastic silver medal, even creating issues for the US in the final. With her YOG team-mates gone, it is Boonstra’s team this year, though she can certainly count on a little help from 16-year-old rising star Laura Westerik.

Mayara Crystina (Brazil)
It will be Crystina’s third straight U18 world event after the YOG last year and the 2013 FIBA 3x3 U18 World Championships. Jakarta will certainly remain a god memory for her after she collected a bronze medal at the Skills Contest. The 1.73 will lead a strong Brazilian team, featuring several players who starred at the FIBA U17 World Championships including the talented Wytalla Motta.

Dilixiati Dilana (China)
Dilana will be one of the tallest players at the event (1.93m) and has already represented China in the 2012 edition and at home last year at the Youth Olympic Games. Her popularity is so big in the country that she had the honour to be China’s flag-bearer at the opening ceremony. DD should be a force in the middle in Debrecen and will look to build on the team’s good run (7th place) last year in Nanjing.

Petra Holesinska (Czech Republic)
The blonde sharpshooter was in the zone last year at the FIBA U17 World Championships (15th in scoring) but fell just short of a bronze medal in front of her fans, against Hungary. With a strong team featuring three other players who were at the event, the 1.78 may find consolation in beating Hungary on their home court this time.

Arike Ogunbowale (USA)
It was tough to single out one player on an impressive US team but the 18-year-old has a chance to complete something special: be the first-ever player to win three gold medals at a 3x3 U18 World event. We have seen her drive in traffic strong like a bull, fast as a bullet in Jakarta in 2013 and at the YOG in Nanjing last season. The future Notre Dame players is just nine games away from writing 3x3’s history.

Sofia Ouahabi (Belgium)
While some players competed in U16 events last summer, the 1.65m Ouahabi was already banging with adults at the U20 European Championship. She’s already labelled as the future of Belgian basketball and her quickness and ball-handling skills could help Belgium further improve on their promising 5th place at the YOG last year. Ouahabi could also use a tip or two from her good friend, Hind Ben Abdelkader, a bronze medallist at the FIBA 3x3 World Championships in 2014 and the current number one 3x3 woman in the world.