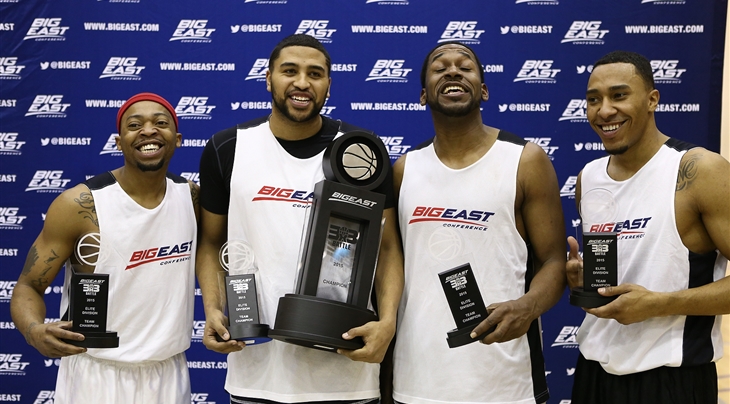 NEW YORK (3x3) - Team NY Queens [also known as Team Bang] became the first team to secure its ticket to the 2015 FIBA 3x3 World Tour by winning the BIG EAST 3x3 Battle at the John Jay College of Criminal Justice in New York on Saturday 7 March.
It will be the second time Team NY Queens features at the FIBA 3x3 World Tour after reaching the Quarter-Finals of the San Juan Masters in 2013, the memory of a lifetime for team leader Haron Hargrave aka "H2O".

"We had a really good time in Puerto Rico two years ago. The World Tour is such a cool event," the sharpshooter said.

In 2013, NY Queens reached the last eight despite Hargrave's half-brother Anthony Soares tearing three ligaments in his foot as they lost to eventual finalist Team Saskatoon (CAN).

The 1.83m ball-handler believes his team will be a lot harder to beat at the World Tour this year.

"This time we'll be more prepared. Now we are very familiar with the rules. This 3x3 game is intense."

"Every possession counts and you can't catch a break. Besides, match-ups are extremely important.

"In the Final against Team Triumph, with the score tied at 15, I took my personal pride aside and subbed myself out to put my brother back in the game for match-up purposes," Hargrave pointed out.

This is also a reason why Team NY Queens made one major adjustment to the team that came in eighth in Puerto Rico two years ago, replacing the athletic Anthony Cox with the extremely versatile Michael Liander.

The voluble Hargrave explained: "To win this game, you need a nice balance on the team and have shooters on both wings to knock down shots. With Liander on the court, teams can't double team anymore or else he will punish them from outside the arc."

Liander is another World Tour alumni, having played at the inaugural 2012 edition in New York. As well as Hargrave, the team features the skilled Soares and the blue-collar Amseshem Foluke-Henderson, whom Hargrave describes as the "heart and soul of the team."

BIG EAST bigeastconf @fiba 3x3 Champs🏆The Top Feels So Much better Then The Bottom So Much… https://t.co/BDNqIGEpbV

Team NY Queens was undefeated in New York, reaching the 21-point mark in every game except the Final and notably defeating Team Philadelphia, a two-time FIBA 3x3 World Tour participant in the Semi-Finals.

"It was a very well-organised event with some pretty good teams. It's fun to see 3x3 grow so much. It is big that a huge college conference like the BIG EAST gets involved," the 30-year-old rejoiced.

Besides qualifying for the FIBA 3x3 World Tour, Team NY Queens also clinched a spot in the USA Basketball 3x3 National Tournament and an opportunity to play at the legendary Madison Square Garden during the Big East Tournament Championship on 14 March.