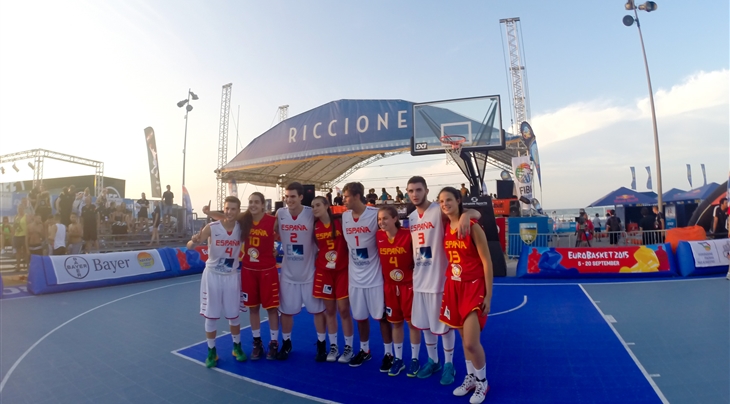 Both teams had a confident road to the finals, sustaining just one defeat each during the pool stage.

In the final, Spain’s women defeated Belgium and the supremely talented Nora O’Sullivan, who stole the show over the weekend with her fancy dribbles and no-look passes (11-8). Lucia Alonso was the winners’ driving force, threatening with constant penetrations and dishing out to her team-mates.

The men’s decider turned into a thriller, with Spain and Poland exchanging a number of long-range shots. Nil Bria was the go-to-player for Spain, who had already shined at the 2015 FIBA 3x3 U18 World Championships, finishing fourth in Debrecen, Hungary on 4-7 June. This said, it was playmaker Carlos Hidalgo who hit a long-range dagger in the closing minute of the final (19-16).

The men's fifth-place game was another nervous game with Georgia and Serbia seeking out the last remaining ticket for the FIBA 3x3 U18 European Championships in Minsk, Belarus on 21-23 August. The corn-rowed Kote Bitsadze was unstoppable for Georgia and helped his country qualify for Minsk, despite Serbia's big man Sasa Vuksanovic's one-man show (19-15).

Besides the above-mentioned Spain, Poland and Georgia, Turkey and Italy are also heading to the final phase in the men’s category, joining the Former Yugoslav Republic of Macedonia, Lithuania, Russia, Belgium and Germany, who qualified last week in Amsterdam.

In the women's category, Spain, Belgium, Slovakia, Germany and Italy will meet the previously-qualified Lithuania, Poland, Israel, Netherlands and Estonia in Belarus.

The Riccione stage of the tour took place on a seaside venue, just 10 kilometres away from Rimini, which was the battlefield of the first ever FIBA organised 3x3 event - the 2011 FIBA 3x3 U18 World Championships.

The Saturday night Dunk Contest was one of the best aerial showdowns in the history of European 3x3 events with Justin Darlington and Jordan Kilganon needing an overtime to decide the winner, despite the latter jumping over a car!

A full recap of this historic dunk contest will shortly be available on FIBA 3x3's YouTube channel, where you can also relive all the games of the event.

The next FIBA 3x3 U18 European Championships Qualifier will take place in Riga, Latvia on 1-2 August.