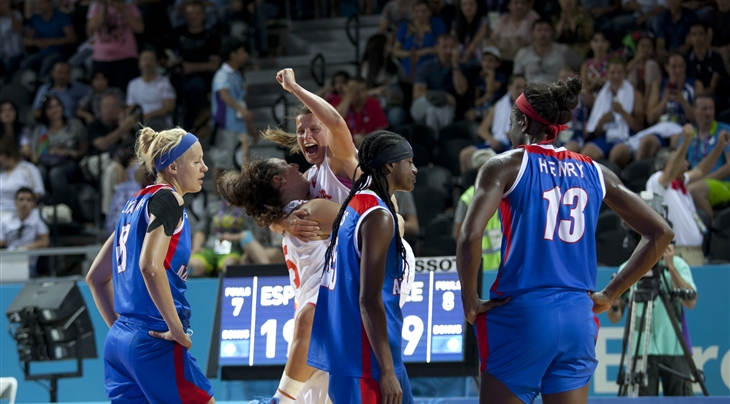 BAKU (2015 European Games) - Slovenia, Spain and Russia are still in pace to win gold in the 3x3 event of the 2015 European Games after clinching a spot in the semi-finals of both men and women categories in Baku, Azerbaijan on 25 June.

It wasn’t a walk in the park for Slovenia’s men who had a come-back win in the Last 16 against a wild-shooting Swiss team (16-14) before winning a thrilling quarter-final against Greece in overtime (18-17) on a Boris Jersin scoop shot.

Slovenia’s women also met Switzerland on their way to the semi-finals but won very convincingly (17-11) led by a possessed Ziva Zdolesk (9 points including 3/6 from behind the arc). Earlier today they had shown their ambitions, upsetting an Ann Wauters-led Belgian team which was announced as one of the top candidates for gold in Baku (14-11).

Spain stamped their two tickets thanks to two wins against Azerbaijan in the Quarter-Finals. In the women’s category, Spain started with a win against Turkey (11-5) before shocking the hosts 19-17 with Vega Gimeno absolutely on fire with 10 points.

The knock-out rounds started with a nervous game for Nacho Martin’s team-mates, beating Italy in overtime (22-20). Spain then took on the hosts (17-14), who were missing Amil Hamzayek who had suffered a high-ankle injury in the Last 16 game against Israel.

Russia’s women recovered nicely from a loss against Romania on Wednesday and showed how they won silver at the FIBA 3x3 World Championships and gold at the European Championships last year. Maria Cherepanova continued to lead her squad in two dominating performances against Netherlands (20-12) and a surprising Irish team (21-15).

In the men’s category, Ilya Alexandrov & co gave themselves a good scare, defeating Estonia (19-18) in the Last 16 at the buzzer on an Andrey Kanygin spin move. The St. Petersburg native was in good form again in the Quarter-Finals scoring a team-high 8 points against Czech Republic (21-18).

The arch-favourites Serbia’s men started with a convincing win over Turkey (21-13) but then had to battle it out to defeat a young Lithuanian team (17-11) thanks to Dejan Majstorovic netting eight points.

Last but not least, Ukraine’s women were a surprising guest to the semi-finals, after back-to-back wins against Slovakia (16-8) and Greece (21-19). Olga Maznichenko had one of the most stunning individual performances of the tournament in this last game, scoring 13 points.

With just one day of competition to go, Jure Erzen (Slovenia) leads all scorers in the men’s category with 39 points, followed by Leonidas Kaselakis (Greece), Dejan Majstorovic (Serbia), Nacho Martin (Spain) and Jan Tomanec (Czech Republic) all tied at 38.

Olga Maznichenko (Ukraine) is the top scorer in the women’s tournament with 40 points, trailed by team-mate Ganna Zarytska (36) and by Anieka Henry (Azerbaijan) who has 34.