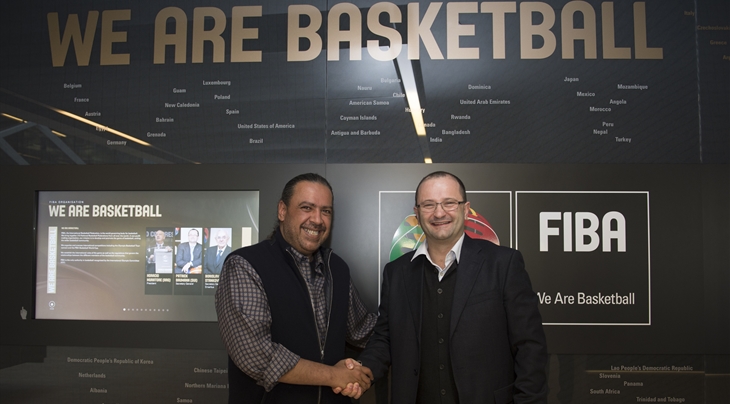 MIES - Sheikh Ahmad Al-Fahad Al-Sabah, the President of the Association of National Olympic Committees (ANOC) and of the Olympic Council of Asia (OCA), on Tuesday visited FIBA's headquarters.

Mr Al-Sabah was given a tour of the House of Basketball and met with fellow International Olympic Committee (IOC) Member, Patrick Baumann, the Secretary General of FIBA.

"I'm very honoured to visit the headquarters of the International Basketball Federation," he said. "I think the leadership of this organisation knows exactly what it wants. Through the building you can see they analysed the culture, the history and the future of the sport as well as the relation with society.

"I enjoyed the museum side and of course [seeing] the other facilities for the comfortable operations of the people who are in charge of the sport.

"I would like to express my gratitude to FIBA Secretary General Patrick Baumann as well as congratulate all who make up FIBA for what they are doing. I wish them all the best to them as they are members of the sports family and sports movement."

During his visit, the Sheikh expressed his pleasure regarding the immense growth that FIBA's 3x3 programme has experienced in Asia and beyond.

He talked of the OCA's recent decision to have 3x3 make its debut at the Asian Games in 2018, when the event takes place in Indonesia, a country where the discipline has been booming ever since it hosted the 2013 FIBA 3x3 U18 World Championships.

We have decided to add 3x3 to the OCA's main programme and its main event. - Sheikh Ahmad Al-Fahad Al-Sabah

"We are going to have 3x3 at the 2018 Asian Games in Indonesia. This is what we are willing to do to support it because it is also on track to be at the Olympic Games.

Asked what his position is on having 3x3 be a part of the 2020 Tokyo Olympics, Mr Al-Sabah says he is in favour of it and has confidence that this can be achieved.

"The IOC met in Monaco and we now know the criteria of how we can work towards those Games. There is a commitment in terms of the [maximum] number of athletes but not with the number of events or sports," he explained.

"So I think there is a good environment to see and to discuss with the technical department of the IOC how we can have 3x3 at the Olympics.

"I believe that FIBA can find a solution between the real number of athletes and the flexible number of events for 2020."

Mr Al-Sabah recalled how 3x3 has experienced a tremendous upsurge in the Asian region over the last decade.

"In our continent, we created the Asian Beach Games. We were thinking 'what would be the way to have the sport of basketball?' because we had beach volleyball, beach handball and beach football. But the fourth, which is very important for us as a team sport in the Olympic programme, is basketball," he said.

"At that time, we discussed this with FIBA and found that 3x3 basketball can be the solution. We have had 3x3 in Beach Games programme since the beginning."

On top of the Asian Beach Games, 3x3 was also featured in Asia in 2014 at the Youth Olympic Games in Nanjing, China, at the ISF World School Championships in Beijing, China and at the FIBA 3x3 World Tour in Beijing, Manila, Philippines and Tokyo, Japan.