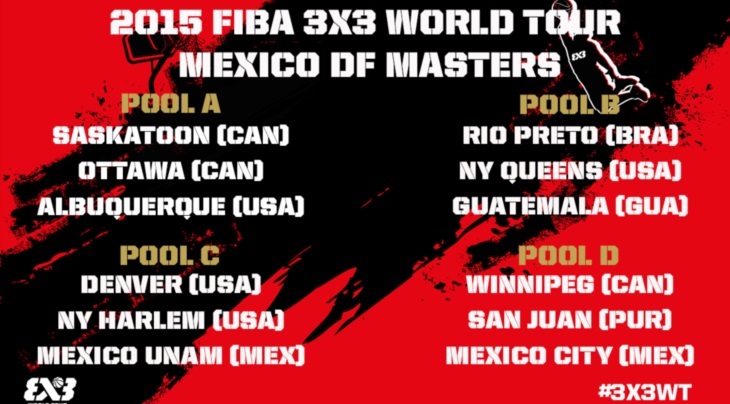 Team Saskatoon was just 10 minutes away from winning the World Tour last year and is now back with just one single change. The team got bigger and considerably younger with the arrival of the 25 year-old 2.01m tall Nolan Brudehl. Those fresh legs will be needed in the pool phase where team captain Michael Linklater and co will compete with Ottawa, featuring former Canadian international Biggie Anderson and the winners of the Hoop It Up tournament in Albuquerque.

Pool B will see a battle of the generations with Team Rio Preto featuring the hero of the 2014 FIBA 3x3 World Tour Rio Masters, 36-year-old Rodrigo Del’Arco and Brazilian basketball legend Rogério Klafke (44) and Team Guatemala who will showcase the four players who represented the country at the 2015 FIBA 3x3 U18 World Championships earlier this year. Between these two extremes will stand Team NY Queens, who are back at the World Tour after finishing 8th at the 2013 FIBA 3x3 World Tour San Juan Masters.

Team Denver’s sharpshooter Derek Griffin will make history in Mexico by becoming only the 9th player to ever play in all four editions of the FIBA 3x3 World Tour. Half of his team has changed from last year where he finished second at the Chicago Masters and featured at the World Tour Final in Tokyo, Japan. The second team of New York (NY Harlem) will try to put NYC on the 3x3 map whereas the winners of the UNAM 3x3 Quest (whose final will be on Tuesday) will attempt to make an upset.

In Pool D, Team Winnipeg (CAN) and San Juan (PUR) are back at the World Tour. The Canadian sides will build on Darcy Coss aka The Cross-Bow’s outside touch while a revamped San Juan team (just one player from last year’s team) will try to re-enact the successful run of the 2012 team that won the first-ever edition of the FIBA 3x3 World Tour. The runners-up of the UNAM 3x3 Quest will complete the pool.

For those not attending the games on the UNAM campus (entrance is free!), pool games will start at 11.00 local time (GMT-5) on Wednesday live on FIBA 3x3's official YouTube channel. The top-two placed teams from each pool advance to a standard knock-out round which starts at the quarter-finals stage, from 11.15 local time on Thursday.