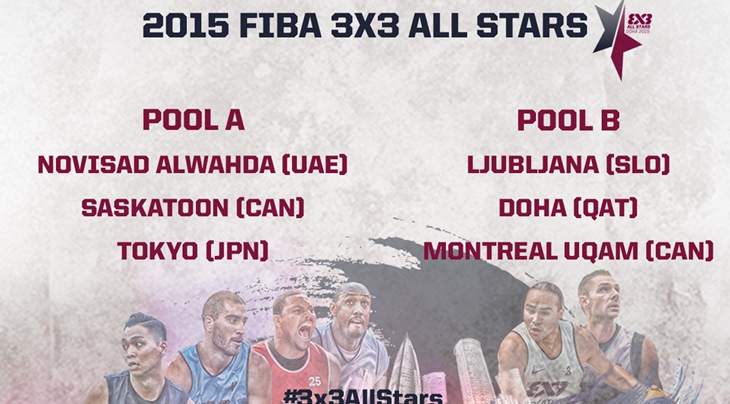 Doha was off to a good start in 2015 and defeated Ljubljana twice, in the quarter-finals of the FIBA 3x3 World Tour Manila Masters (which they finished 3rd) and in the final of the Beijing Masters, 22-20 in overtime! 2013 seemed far away. It was the year Ljubljana defeated Doha in the pool stage en route to the first-ever FIBA 3x3 All Stars title.

The end of the World Tour season did not go as planned for Yaseen Musa and co as the team exited the World Tour Final as early as the pool stage after losing to Manila North (PHI) and their thousands of Filipino fans.

Doha  made two changes to the team for the All Stars and welcomed back two players who featured with Musa on the Qatari national team which won the 2014 FIBA 3x3 World Championships in Moscow: playmaker Boney Watson and big man Erfan Ali Saeed.

The winners of the FISU 3x3 World University League Montreal UQAM (CAN) will complete the pool. Doha are likely to take the young team very seriously after narrowly edging out an U18 team (Kaunas U18, LTU) last season in the semi-finals of the FIBA 3x3 All Stars.

Pool A will see a rematch of the 2014 FIBA 3x3 World Tour title game. Last year in Tokyo, Novi Sad Al Wahda (UAE) defeated Saskatoon (CAN) and started a complete domination of the FIBA 3x3 scene, winning the 2014 FIBA 3x3 All Stars and the World Tour for the second time last month in Abu Dhabi.

In the meantime the second Canadian team at the All Stars did not recover from this loss, dropping their only two games at the FIBA 3x3 All Stars last year and failing to qualify to the World Tour Final in 2015.

Tomoya Ochiai will make his third straight trip to the FIBA 3x3 All Stars, this year with Team Tokyo. The 28 year-old Japanese star assembled a brand new squad to compete with Novi Sad Al Wahda and their star – number one 3x3 player in the world – Dusan Domovic Bulut – that beat them at the 2014 FIBA 3x3 All Stars and in the quarter-finals of the Beijing Masters this season. Ochiai will team up with reigning Red Bull King of the Rock 1-on-1 world champion Kivanc Dinler…who confessed last week he was hoping not to face Novi Sad Al Wahda.

For those not attending the games at the Al Gharafa Sports Complex (entrance is free!), pool games will start at 17.00 local time (GMT+4) on Friday 11 December live on FIBA 3x3's official YouTube channel. The top-two placed teams from each pool advance to the semi-finals. The final will be held at 21.50 local time on the same day. The FIBA 3x3 All Stars will also see an exhibition game between a Filipino and a Qatari national team and a never-seen-before dunk contest between the best dunkers in Europe and the Americas.