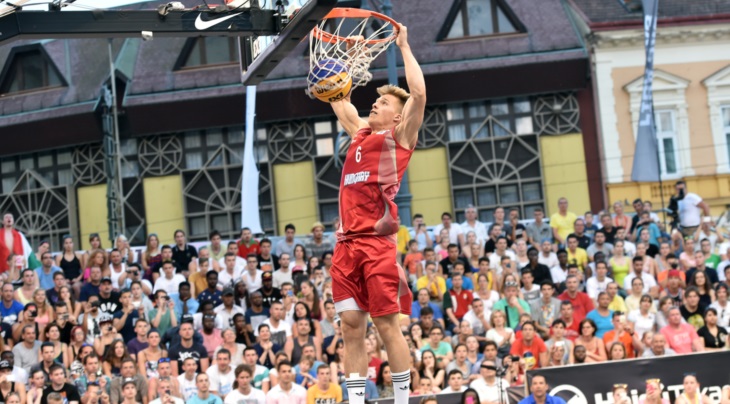 The venue is being set up next to the Freedom Monument and is the place that hosted a 3x3 European Championships qualifier a year ago and a 3x3 Eurotour stop in the summer of 2013.

The level of competition is expected to be extremely high, as reigning 3x3 U18 World Champs France, although with a revamped roster, are going to battle out for one of the five trips to Minsk in the women's category. They will be joined by bronze medalists Hungary and by two more teams that took part in the Debrecen event on June 4 - 7, 2015: Czech Republic (finished 10th) and Romania (21st). Russia and Latvia, who haven't had any international 3x3 experience yet this cycle, will try to contend for a pass to Minsk, while host Belarus, who are automatically qualified to European Championships, will have a chance to test their x's and o's.

Four out of nine men's category teams also took part in the 2015 3x3 U18 World Championships in Debrecen and are France (finished 3rd), Romania (7th), Hungary (13th) and Estonia (19th). They will be joined by Armenia, Denmark, Israel, Latvia and Switzerland in the pursuit of the five passes to Minsk.

Riga is also the battlefield of one of the best dunk contests in the world - The Ghetto Games Kings Of Air - and two athletes that have previously taken part in it - Dmitri 'Smoove' Kryvenko of Ukraine and Rafal 'Lipek' Lipinksi of Poland - are up for another showdown as part of the entertainment programme during the 3x3 U18 Qualifier.