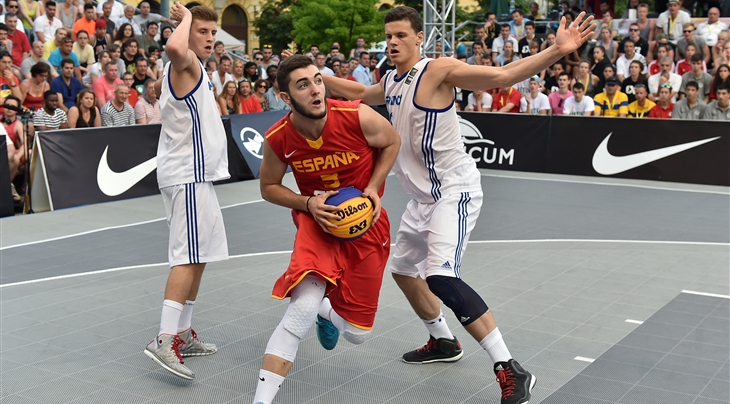 3x3 is going back to the Italian coast of the Adriatic, in Riccione, just 10 kilometres away from Rimini, the venue for the first-ever FIBA 3x3 event: the 2011 FIBA 3x3 U18 World Championships.

Seven women's teams and nine men's teams will compete for the five tickets (in each category) for the 2015 FIBA 3x3 U18 European Championships, which will be held in Minsk, Belarus on 21-23 August.

In the men's category, Spain looks like the team to beat after a similar team (only one substitution) reached the semi-finals of the FIBA 3x3 U18 World Championships in Debrecen, Hungary just a month ago. It will be a chance to see Nil Bria Mendez again after the slasher scored a pair of game-winners in Hungary.

Poland (9th), Turkey (15th) and Georgia (20th) were the other teams which featured at the Worlds.

Serbia are making a comeback to the international U18 stage after wining gold at the 2012 FIBA 3x3 U18 World Championships in Alcobendas, Spain.

The Italian hosts, Bulgaria and Slovak Republic will also fight for the pass to Minsk, while the final hosts Belarus, who wrap up the list of men's category contestants in Riccione, are automatically qualified and will use this event as a practice opportunity with no pressure on them.

This may well be the most competitive round of qualifiers in the women's category with all but one teams having taken part in this year's U18 World Championships.

Three of them (Italy, Belgium and Germany) even reached the quarter-finals, while Spain finished 11th, Switzerland 13th and Slovak Republic 19th. Denmark is the only team from the list that is new to 3x3 this season.

Team Spain have the same lineup they used in Debrecen and look to be one of the favourites of the competition. Their leader Lucia Alonso should not be left alone outside the arc: she struck silver at the Shoot-Out Contest in Hungary.

In addition to the U18 European Championships qualifier, the event will feature the final stage of the Streetball Italian Tour, which will send a winning team to the FIBA 3x3 World Tour Prague Masters (8-9 August). Minibasket and wheelchair competitions will also take place.

And, of course, a Dunk Contest featuring two professional dunkers Jordan Kilganon and Justin Darlington will be the fan-favourite highlight set for 21.00 on Saturday.