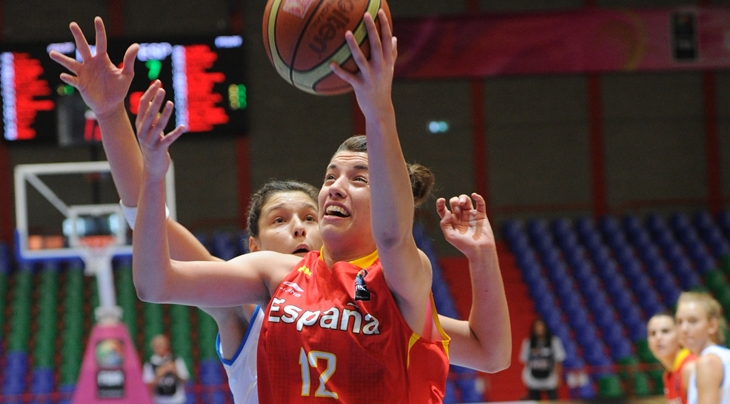 BEMBIBRE (FIBA U19 Women’s World Championship) – Swapping a college career for the pro-game was a challenging decision to make for Spanish forward Laura Quevedo.

Just months into her freshman year with the Miami Hurricanes, the teenager opted to head home and take up a pro-contract in Liga Femenina with Bembibre.

"They were difficult times and it’s not easy to take a decision like that and make a sudden change," confirmed Quevedo.

"But I’m convinced I was right, since I was not feeling well there and because of that, I decided return to Spain in order to find myself.

"Now I have to grow and mature as I'm young and my main goal and the reason I practice every day, is to become an important player in women's basketball."

A likely force for Spain in Chekhov, there was an irony in that she left a team coached by Katie Meier – the play-caller who led USA to glory at the 2013 edition of the event - not that Quevedo is thinking about finishing top of the podium herself.

She stressed, "I want to focus on the First Round and can’t look past it, as we have three very strong rivals with China, Egypt and USA.

"We are ambitious and we want to win all three games, but we know the difficulties and will go step by step, as well as respecting our rivals."

Maybe her cautious approach is due to Spain relinquishing their grip on the U18 European Womens' Championship title last year, although Quevedo is adamant she isn’t dwelling on events in Matosinhos.

She insisted, "I don’t think it was disappointing as we played the Semi Finals against Russia, a great rival who were physically superior to us and it was an even game until the end.

"That happens in basketball and things are decided by small details and we could have won.

"We then got a deserved bronze medal against other major rival in Serbia.

"So overall, we had a great tournament, played well, won all our games except one and gained respect."

"It was the first time for me and my team-mates playing at a FIBA World Championship in 2012," reflected the Madrid native.

"We had played in European Championships, but we knew it would be different with other types of basketball and while nervous at first, we enjoyed the experience.

"Off the court we had a great time, but we enjoyed it more on the court as we bounced back from two defeats in the Group stage to play the Final.

"We know it’s not easy to beat USA as they are the world power of basketball, but I think every day we are moving closer to them."

She continued, "I also like the 3x3 format because it’s more like street-ball and you can play more one-on-one, you also have more space on the court and can better show your ball handling or other qualities.

"I like everything, the format, the place and the big atmosphere – it all matters and not just whether you win a medal or not as you must feel good where you are."

However, Quevedo almost didn’t pick up a basketball at all.

She explained, "When I started school, my mother told me that I had to do something in the afternoons, such as sport or other activities.

"It’s curious as I don't know why I chose to play, since nobody in my family had played basketball before and I had never even watched a basketball game – but it was a great choice."

Now the 18-year-old is an addict of the game and only too happy to watch other players and be inspired by them.

"Right now, my role model is Alba Torrens, as she is a very versatile player and can still can do everything perfect like a point-guard, a shooting guard or a forward.

"She’s one of the best players that have ever been on the European and World stage," smiled Quevedo.