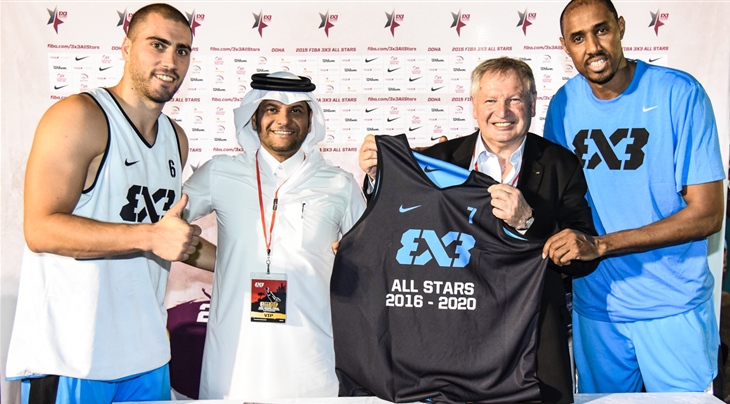 The FIBA 3x3 All Stars is the season-ending event of 3x3 basketball and the most lucrative one for the players with USD $120,000 in prize money. The first edition was staged in Doha on 12 December 2013 and saw Team Brezovica (SLO) win the title.

Novi Sad (SRB) dominated the 2014 edition in a packed venue, located in Katara with the Doha skyline on the horizon for the second time.

The past two editions of the event have also included school and hospital visits as well as clinics for referees and young players.

"Thanks to H.E. Sheikh Saoud Bin Abdulrahman Al Thani's visionary leadership, QBF have been a pioneer in the development of 3x3, not only winning the 2014 FIBA 3x3 World Championships but also establishing the FIBA 3x3 All Stars as one of the most prestigious FIBA 3x3 events in the world."

The 2015 edition will feature some new activities, including the FIBA 3x3 Gala Dinner and the FIBA 3x3 Awards, where the discipline’s best players and organisers will be honoured.

Besides, the event will be held in the state-of-the-art facilities of QBF in Al Gharafa.

"It is with great pleasure that we have made this long-term commitment to the FIBA 3x3 All Stars," QBF President H.E. Sheikh Saoud bin Abdulrahman Al Thani said.

"The event has quickly become a local favourite and shows the unlimited potential of 3x3 basketball. Signing until 2020 is the symbol of the great plans we have for the young urban discipline. We hope it [2020] is the year 3x3 is played for the first time at the Olympic Games."

The 2015 FIBA 3x3 World Tour winners (FIBA 3x3 All Stars reigning champions Novi Sad Al Wahda [UAE]) and the winners of the FISU 3x3 World University League (Montreal UQAM [CAN]) were the first two teams to stamp their ticket for this year’s edition, which will be held on 11 December.

The other four participants are those who led the FIBA 3x3 Individual World Ranking as of 1 November, in Qatar (Yaseen Musa and his Doha team), Europe (Jasmin Hercegovac and his Ljubljana (SLO) team), Americas (Michael Linklater and his Saskatoon (CAN) team) and the Rest of the World (Tomoya Ochiai and his Tokyo (JPN) team).