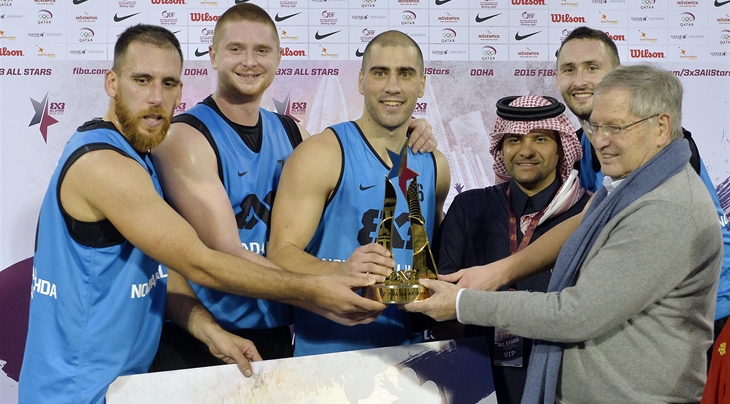 DOHA (FIBA 3x3 All Stars) - Novi Sad Al Wahda (UAE) repeated as FIBA 3x3 All Stars winners, after beating rivals Saskatoon (CAN) 21-14 in the final in a packed outdoors venue in Doha, Qatar on 11 December 2015.

Just one day after their leader Dusan Domovic Bulut received the World’s #1 player trophy at the FIBA 3x3 Awards, Novi Sad Al Wahda continued their domination of the 3x3 basketball scene. For the second consecutive year, the team won both the FIBA 3x3 World Tour and the FIBA 3x3 All Stars over the same season.

Bulut ended the event as top scorer with 27 points in 4 games and was named MVP. He was instrumental in the title game, scoring 6 points including the winning free throw. His team-mate Marko Savic was the final top scorer with 8 points while sharp-shooter Dejan Majstorovic added 7 points.

The FIBA 3x3 All Stars brings together all the number ones in the 3x3 Individual World Ranking from all around the world.