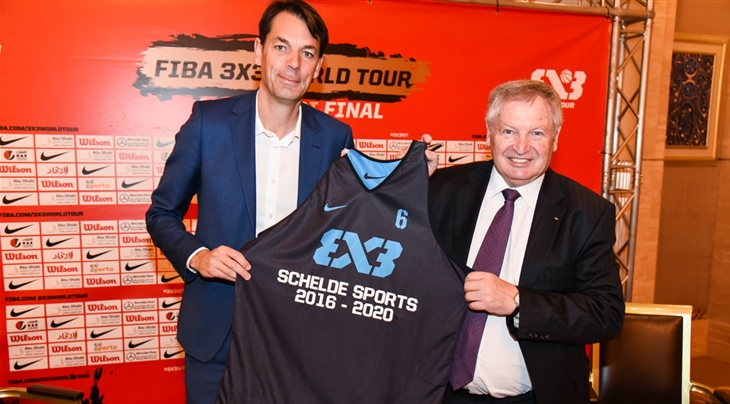 MIES, Switzerland (FIBA 3x3) - Schelde Sports and FIBA, the International Basketball Federation, announced on Thursday that they are extending their collaboration in the development of 3x3.

FIBA's partnership with Schelde Sports to be the official provider of backstops units for all FIBA 3x3 events began in March 2013 and an agreement was initially put in place to last until 2016. However, in light of their successful cooperation and the rapid rise of FIBA 3x3, the two parties have decided to renew the agreement more than a year before it was due to expire.

Schelde Sports bring a long-standing expertise in the development of durable backstop units as well as creative know-how to have the most urban and innovative devices from the top international FIBA 3x3 competitions such as the FIBA 3x3 World Tour all the way down to the grassroots competitions.

FIBA 3x3 Managing Director Alex Sanchez said: "We're delighted to extend this partnership between our 3x3 discipline and Schelde Sports for the next five years.

"3x3 is on the rise and working with leading companies such as Schelde Sports paves the way for our Olympic aspirations."

Bart Prinssen, Schelde Sports' General Manager, said: "Schelde Sports has joined the FIBA 3x3 World Tour in 2013 as the official global backstop supplier. Over the last years we have been inspired by the large ambitions of FIBA and the cosmopolitan 3x3 community around the world.

"The cooperation has been very strong from the beginning and we are proud to renew our contract until 2020. It is our goal to continuously launch new products and features for 3x3 Basketball."

ABOUT SCHELDE
Schelde Sports was founded in 1892 as a specialist manufacturer and installer of school furniture and basic physical education equipment. Over the years, as the importance of competition sports grew, the focus gradually shifted to the design and manufacture of high quality equipment for basketball, volleyball, handball and other ball- and team sports apparatus.

At present, in-house expertise and international exposure at major international tournaments and championships have gained Schelde Sports an enviable reputation of trendsetter and innovator in the field of portable as well as suspended basketball backstop units for professional and high-level competition use.

In 2010 Schelde Sports was acquired by the JF Group and its equipment is being marketed worldwide by JF International, based in Helmond, the Netherlands.