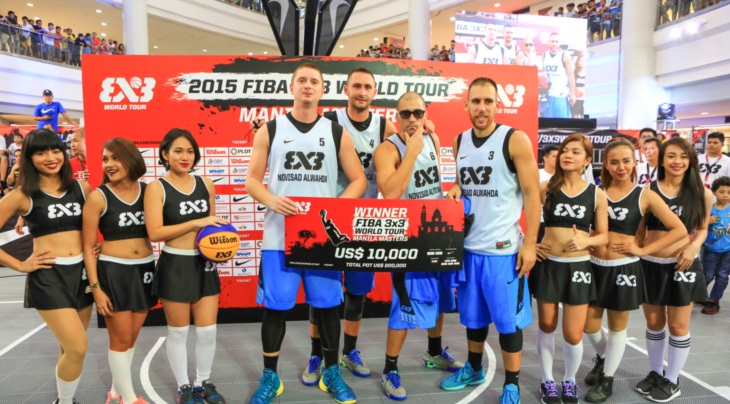 MANILA (2015 FIBA 3x3 World Tour) - Team Novi Sad Al Wahda started their World Tour title defence in style, with a resounding win at the Manila Masters. In the final, the reigning champs defeated (21-14) a Manila North team supported by thousands of fans in Robinsons Place, one of Manila and Asia's biggest shopping malls.

Manila North had no answer for Dejan Majstorovic and number one 3x3 player in the world Dusan Domovic Bulut (10 and 9 points respectively) in the final. The Filipino squad's 14 points were nonetheless the highest mark conceded by the reigning champs in the event, proof of their complete domination.

The ankle-breaker specialist Romeo was a star in Manila, claiming the MVP, top scorer and PLDT Shoot-Out Contest trophies. His team-mate Rey Guevarra won the SMART Dunk Contest. The event was highlighted by 1.65m dunker Porter 'What's Gravity?!' Maberry, dunking over a player 30 centimetres taller, sporting a Jimmy Alapag jersey as the Filipino basketball legend was in the jury.