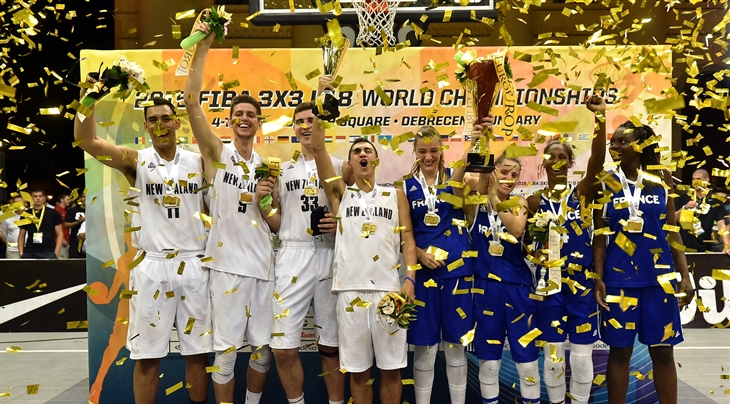 The 2.05m Tai Wynyard was just 13 years old and did not even make his school basketball team when the likes of Isaac Fotu and Tai Webster won the 2011 FIBA 3x3 U18 World Championships in Rimini, Italy. Just a few years later, those two were playing for New Zealand’s Tall Blacks at the 2014 FIBA Basketball World Cup.

Wynyard won MVP honours this past weekend and led his country to a thrilling win over reigning champions Argentina in the final (20-18). He was the top scorer in the title game with eight points and made his presence felt on defense, including a memorable block on Martin Ariel Fernandez. The Argentinian star also scored eight points in the decider, finished the event as top scorer and joined Wynyard on the Team of the Tournament.

The third player to get the accolade was high-rising Killian Tillie, who led France to the bronze medal following a win over Spain (16-13) with a little help from team-mate Bathiste Tchouaffe.

Les Bleues did even better in the women's tournament, as they upset the United States in the final (20-19). Since 2012, the USA had won all five 3x3 women's competitions (U18 and senior). France's speedy Lisa Berkani caught fire in the final, scoring 11 points and received the MVP award.

Two-time 3x3 gold-medallist Arike Ogunbowale scored nine points in the final, finished as the women's top scorer and was a member of the Team of the Tournament.

Hungarian crowd favourite Nina Aho also found a spot on the list after spearheading her team to bronze following a win over Israel (14-11).

The individual contests confirmed the French domination in Debrecen as Berkani won the Skills Contest and Tchouaffe the Shoot-Out Contest.

In the Shoot-Out Contest, Tchouaffe narrowly beat Spanish contestant Lucia Alonso, who had to settle for silver and Italy’s Giulia Ciavarelli, who took bronze.