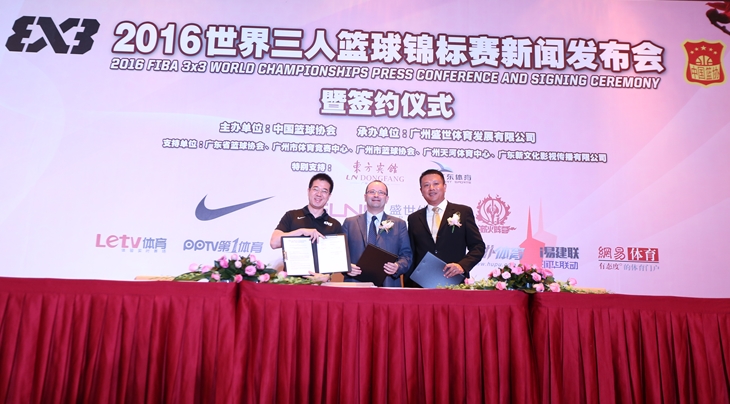 GUANGZHOU, China (3x3) - The 2016 FIBA 3x3 World Championships will take place in Guangzhou, the third-largest city in China, FIBA announced at a press conference on Sunday.

The tournament will be held over the course of five days from 11-15 October, just outside the Tianhe Sport Complex with a view on the iconic 600-metre tall Canton Tower.

The Chinese Basketball Association (CBA) will host the third edition of the biggest national-team 3x3 event - the first outside of Europe - following the ones staged in Athens, Greece in 2012 and Moscow, Russia in 2014.

"It was heart-warming for me to see how popular 3x3 basketball has become in China when I attended the 2014 Youth Olympic Games in Nanjing and I quickly realised this is a nation-wide phenomenon."

"We are thankful to FIBA for granting the 3x3 World Championships to China and to Guangzhou for hosting such an important tournament," said CBA Vice-Director, in charge of 3x3, JinSheng Li.

Guangzhou officials assessed 3x3 would feel itself at home in the city.

"We have a history of hosting outstanding international basketball competitions, such as the Stankovic Continental Championship and CBA All Stars. We are the home of three professional basketball clubs and two of them are in the domestic top league. We are determined to present a great 3x3 tournament."

All games at the 2016 FIBA 3x3 World Championships will be played on the same court with 20 men's and 20 women's teams competing in a team event and in three individual contests (men's dunk contest, women's skills contest and mixed shoot-out contest).

The selection of teams for the tournament is based on the FIBA 3x3 Federation Ranking, which includes sport and development criteria, allowing both the strongest teams in the field as well as the most active countries to participate in the event, which fulfils a key aim of 3x3 - diversity. At least 30 different territories will be represented at the event.

China is also among the last two bidders for the right to host the 2019 FIBA Basketball World Cup. The decision will be taken on 18 June.

Exciting, urban and innovative, 3x3 basketball is inspired by several forms of streetball played worldwide and is considered the world’s number one urban team sport. Steered by FIBA, games see two teams of three players face off on a basketball half-court.

It was played successfully for the first time in international competition at the 2010 Youth Olympic Games in Singapore and since then has benefitted from the launch of a yearly city-based 3x3 World Tour (www.fiba.basketball/3x3worldtour) and national-team world championships.

FIBA 3x3 events are played on Sport Court's floors with Schelde backstops and will benefit from Wilson's innovative and specially-made ball for 3x3.