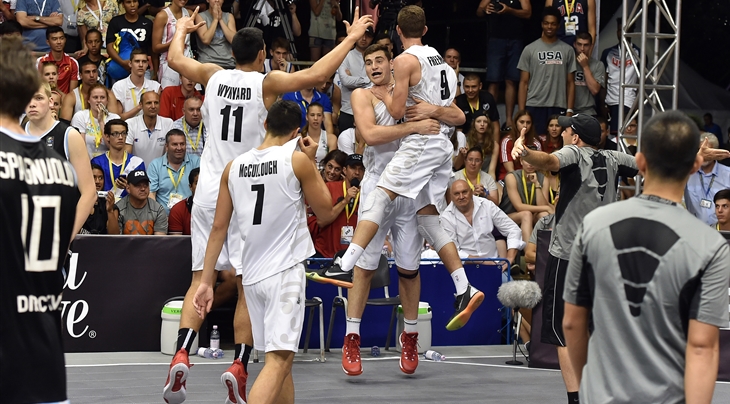 Both have graduated to the big stage in the five-on-five game, however, and competed for the Kiwis.

Last summer, the two were in the squad that competed at the FIBA Basketball World Cup in Spain.

For hoops fans in New Zealand, there is sense of deja vu.

Once again, the country's team has finished first at the 3x3 U18s Worlds that was just played in Hungary.

New Zealand Tall Blacks coach Paul Henare, who will lead the team at the FIBA Oceania Championship in August against Australia and try to qualify for the Rio de Janeiro Olympics, is sure to have been impressed by the 3x3 exploits of the youngsters.

All four players in that team have every chance of making their mark for the Tall Blacks in the future.

The New Zealanders had to dig deep to beat Argentina in a thrilling title game.

Kentucky Wildcats-bound Tai Wynyard was named the MVP of the 3x3 event.

"Kentucky will be rubbing their hands together," Anthony Corban, the New Zealand coach, to stuff.co.nz.

"They have a special Kiwi talent coming their way."

"He [Wynyard] has developed so well at the [New Zealand] Breakers and I know [Tall Blacks coach] Paul Henare will be watching him closely, as he will with Sam."

He has verbally committed to play for the Washington Huskies in American college basketball.

Sam is an exciting talent, he is Tall Black material. - Corban

"He [Timmins] has a high basketball IQ and has come out of a really good program with [former New Zealand Tall Black] Mark Dickel.

"He is one of a special group of players emerging in our country."

Nikau McCullough and Matt Freeman have big futures, too.

Each has played for New Zealand in the five-on-five game at youth level.

McCullough served as captain of New Zealand at the 3x3 U18 World Championships.

"He has taken to the task superbly and contributed in a big way to this success.

"Matt has delivered throughout the tournament...

"I chose him as a shooter, which raised a few eyebrows, but he delivered today [final day of competition] in some clutch moments.

"He, too, has come out of a very good program with Westlake Boys."

The 2.08m Freeman gave an interview to scout.com before the event in Debrecen and said there were a lot of options for him to play American college basketball, too.

He will go and look at some of the universities that are interested in offering him a scholarship.

He talked about how he likes to play the game.

"For me it's a lot of perimeter stretching the floor and being able to drive as a big man," Freeman said.

All four have a lot to keep their minds occupied in the coming weeks and months but each will no doubt be keeping an eye on the Tall Blacks.

They may be wearing that jersey in more important games in the very near future.