Pavlov makes it look easy on Day 1 of Prague Masters 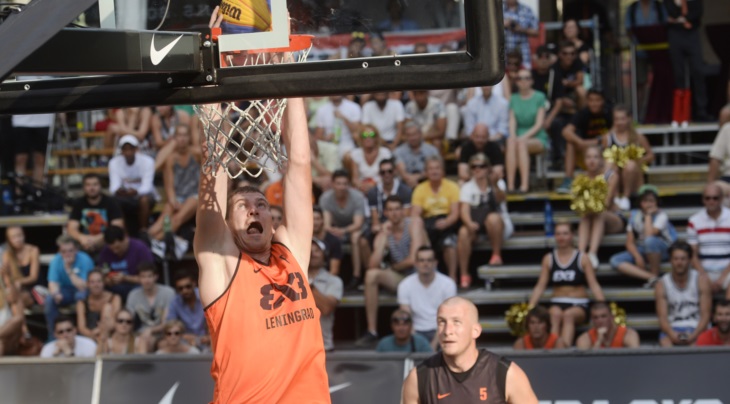 PRAGUE (2015 FIBA 3x3 World Tour) - Just two months ago, the athletic Alexandr Pavlov led Russia to a shiny gold medal at the 3x3 event of the European Games. After a blazing start on the opening day of the 2015 FIBA 3x3 World Tour Prague Masters, where he scored an event-high 20 points in 2 games, the 29-year-old looks like he could find success with his Leningrad team as well.

Leningrad was one of the only two teams to win both games today. Not only did they beat the local favourites from Ostrava in Pool A, they also punished the reigning champs Novi Sad Al Wahda (14-9). The winners of the Manila Masters last weekend almost disappeared in the pool phase but Dusan Domovic Bulut decided otherwise, scoring 13 points against Ostrava.

Trbovlje is the only other team to keep a clean record on Day 1 with an inspired Gasper Ovnik who tops the scoring charts with Pavlov with 20 points, including 8 shots from behind the arc. Ub earned their ticket to the quarter-finals the hard way on a cold-blooded two-pointer in overtime courtesy of Dejan Radulovic.

In Pool C, Psychiko’s upset of Kranj - the third best team at the World Tour last season – was not enough to make it to the next stage. Kranj will be joined by Kolobrzeg and their trio of Rduch brothers.

Team Paris made a lot of new fans on Day 1 with Abdoulaye Loom swatting shots like mosquitos and bringing Venceslas Square down on a jaw-dropping alley-oop. After an easy rout of Amsterdam, the French team was upset by Team Belgrade in the closing seconds on a short Aleksandar Solujic floater.

Polish dunker Arek Aro Przybylski impressed at the Street Sport Line Dunk Contest Qualifier, with a performance which included a John-Wall-like dunk over another player.