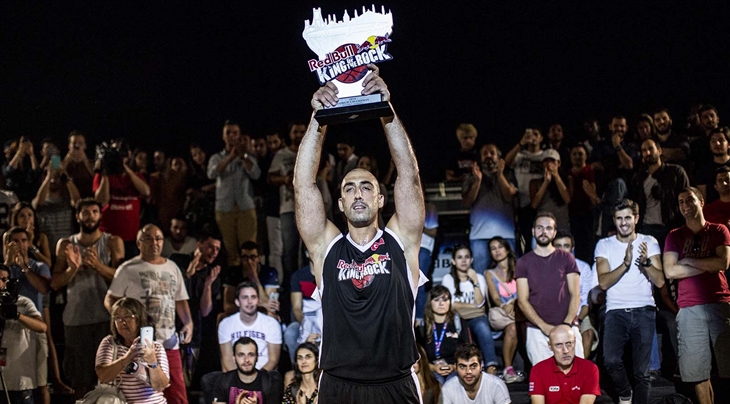 MANISA, TURKEY (FIBA 3x3 All Stars) - Turkish player Kivanc Dinler has become one of the most decorated players in one-on-one basketball history after winning the Red Bull King of the Rock tournament the last two years.

After getting an invitation to play for Team Tokyo at the FIBA 3x3 All Stars from number one 3x3 player in Asia, Tomoya Ochiai, he now has his eyes set on 3x3 stardom.

"I met him last year for the first time in Chinese Taipei at the King of the Rock final. You can't miss him because he is always so colourful. Not only does he dress colourful but he is also a colourful person!

"Although his English is not perfect, we became friends. I knew we were [friends] because when I won I could see in his eyes how happy he was for me.

"We became better friends this year and a few weeks ago he texted me to say he was assembling a strong team for the FIBA 3x3 All Stars and he'd be happy to play with me. I said of course I'd love to. All I needed was to get permission from the university where I'm a lecturer and I got it so now I'm really really excited."

"He was very good in King of the Rock," he recalled.

"Both mentally and physically.

"He brings to the team not only his technical skills but also his experiences playing overseas."

At 38, Dinler has a long career in basketball and one-on-one under his belt to share with his new team-mates.

"I have had my share of success with one-on-one," said Dinler.

"Stamina and endurance are some of the keys to win. Basketball has been my profession for many years, dealing with contracts, coaches, systems.

"3x3 is really basketball joy coming to life. I love playing this game."

It's a dream come true to play against the best. - Dinler

"I really want to win the All Stars this year," claimed the three-time FIBA 3x3 All Stars participant.

"This is why I asked Kivanc to lend his force to the team."

We know it is a very tough event and that we cannot have training before the event but we will concentrate on the game and since Dinler is a very clever player, I know he will adjust very quickly."

Besides it will not be Dinler's first time playing 3x3. He just missed out on a qualification to the FIBA 3x3 World Tour after losing in the final of the Turkish 3x3 Quest this summer and represented his country at the first-ever European Games in Baku, Azerbaijan on 23-26 June.

"Unfortunately we got to play Serbia, Russia and Spain in the pool phase and the Last 16. These three ended up being the three medallists! I know the four players from Serbia are playing at the All Stars as well [as Team Novi Sad Al Wahda] and I hope we don't face them."

"They play perfect basketball. I could show their games to the kids I coach! Bulut is a great player and the funny thing is "bulut" means "cloud" in Turkish!"

Dinler will hope Bulut and his team do not become a cloud on the road to success for Team Tokyo, that will also feature Ochiai’s fellow Japanese 3x3 national team member Seaun Eddy and 3x3 legend Angel Santana.