Ogunbowale ready for a 3x3 three-peat 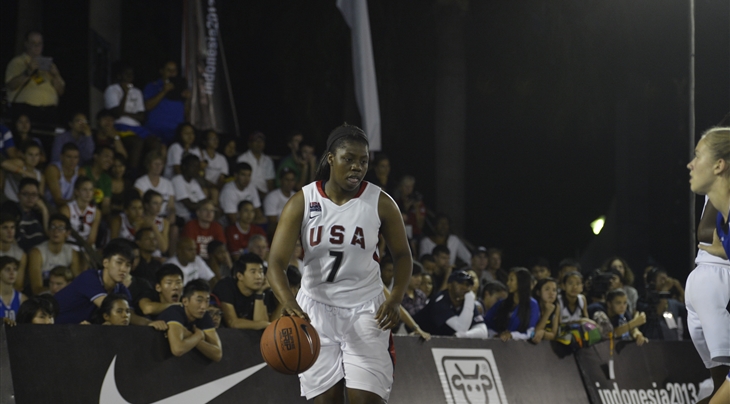 MILWAUKEE (3x3) - The 18-year-old US player Arike Ogunbowale says she's "really excited to play 3x3 again" and have a chance to enter the history books by becoming the first player to win a 3x3 U18 title three years in a row, at the 2015 FIBA 3x3 U18 World Championships, in Debrecen, Hungary on 4-7 June.

Back in 2013, a 16-year-old came all the way from Wisconsin to Jakarta, Indonesia and made noise racing to the rim like a bull against girls sometimes two years and 20 centimetres bigger, all the way to a shiny gold medal. An eye-opening experience.

"It was my first time playing 3x3 and just my second time out of the US. Everything was new to me. I remember the heat and how cool it was to play with non-stop music at nights under the lights," Ogunbowale recalled.

One year later, the 1.81m player won her second 3x3 gold medal in Nanjing, China at the 3x3 event of the Youth Olympic Games (YOG), an experience that left an indelible memory.

"We were in the Olympic village for two weeks and it was amazing to meet athletes from all over the world and so many different sports," she explained.

In 2015, Ogunbowale has a unique chance to become the first-ever 3x3 player to complete a three-peat, three titles in a row and pass her former team-mates Brianna Turner and Katie-Lou Samuelson who both won a 3x3 U18 world event twice.

The 18-year-old is confident she could make history.

3x3 has definitely helped me elevate my game. - Ogunbowale

"We'll be a really good team in Hungary. Erin Boley is strong and can shoot from anywhere, Natalie Chou can do everything and Kristine Anigwe is so big. I have a video of her dunking!

The USA are seeded in Pool C and start the competition against Switzerland on Thursday 4 June.