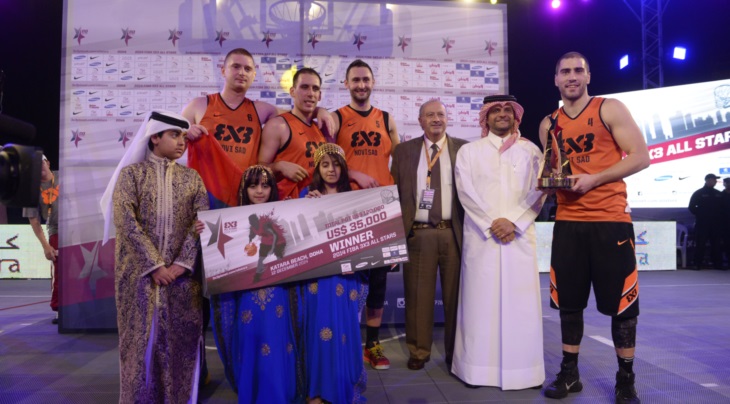 DOHA (FIBA 3x3 All Stars) - Team Novi Sad Al Wahda (UAE) will get a chance to retain their FIBA 3x3 All Stars title in Doha, Qatar on 11 December 2015, after winning for the second consecutive time the FIBA 3x3 World Tour.

World number one Dusan Domovic Bulut led his squad to a historic double in Abu Dhabi and not only did he earn a USD $30,000 cheque, he also secured an automatic spot to the FIBA 3x3 season-ending event in Qatar, the FIBA 3x3 All Stars.

Novi Sad Al Wahda are the second team to qualify for the event. Montreal UQAM (CAN) earned a ticket to Doha as a guest team after winning the FISU 3x3 World University League in Xiamen, China on 11-13 October 2015.

The other four participants will be the #1 player in Qatar, in Europe, the Americas and in the rest of the world at the cut-off date of 1 November, with their respective team.

The first-ever FIBA 3x3 All Stars sees six teams from around the world meet on 11 December for one day in Doha, Qatar, starring the:
Novi Sad Al Wahda are the reigning champions after defeating Doha in the final (20-12) on 11 December 2014.