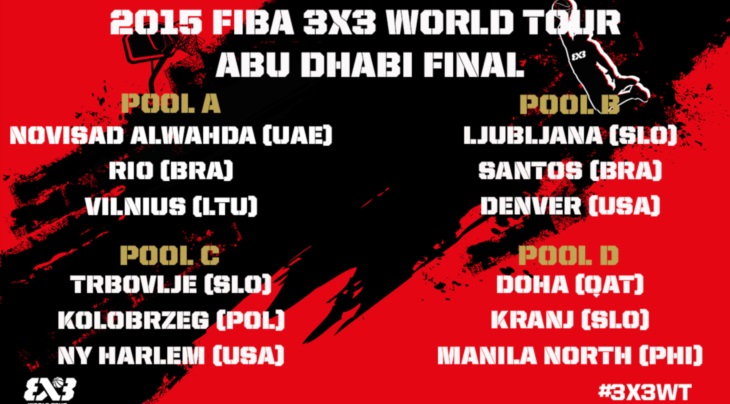 ABU DHABI (2015 FIBA 3x3 World Tour Final) - The FIBA 3x3 World Tour reigning champs Novi Sad Al Wahda (UAE) are up to a tough test in the pool phase already as they meet Vilnius (LTU), the only team which has not lost a single game in the competition this season.

Dusan Domovic Bulut’s team has been sensational this season, qualifying to four different Masters and winning two of them (Manila and Rio de Janeiro just two weeks ago). This said, they will get a nice challenge on Day 1 in Abu Dhabi with Vilnius, who had a clean 5-0 record at the Lausanne Masters this season. Rio (BRA), who finished third at the Rio Masters, will complete the Pool.

The other former World Tour winners (in 2013) Ljubljana (SLO) did not win a single Masters in three attempts this year but their second place in Beijing secured their return to the World Tour Final. They will headline Pool B with two teams that know each other pretty well. Santos (BRA) and Denver (USA) already met last season in the pool phase of the World Tour Final in Tokyo, Japan. Though Santos had won, Denver advanced based on total points scored (all teams, including Novi Sad Al Wahda were tied with just one win).

Pool C is the only group without a single Masters winner this year but is not short of talent and rivalry. Just two months ago, in the quarter-finals of the Prague Masters, the experienced Trbovlje (SLO) (third appearance at the World Tour Final) was upset by Kolobrzeg (POL), a team featuring three brothers, which made it to the final in Czech Republic. Simon Finzgar’s team eventually secured their ticket to Abu Dhabi after finishing second in Lausanne. NY Harlem almost qualified as the Mexico DF Masters winners before Denver’s Paris Kyles hit two impossible shots. They will be another team to watch in the UAE capital.

Yes those pools are tough but not one gets close to the deadly Pool D. Kranj (SLO) are back after reaching the semi-finals for the last two years and won probably the most competitive event of the season in Prague. Add Doha (QAT) and Manila North (PHI) and you have the script to the biggest thriller of Day 1. Doha and Manila North have met before with the Qatari side beating the latter in the quarter-finals of the Manila Masters in 2014. Many things have changed since then with Yaseen Musa adding three athletic team-mates this year, including the spectacular Dominic James. Manila North included two new players and their star player Calvin Abueva is fresh off a scintillating performance at the 2015 FIBA Asia Championship, where he led the Philippines to the final.

For those not attending the games near the Corniche (entrance is free!), pool games will start at 18.40 local time (GMT+4) on Thursday 15 October live on FIBA 3x3's official YouTube channel. The top-two placed teams from each pool advance to a standard knock-out round which starts at the quarter-finals stage, from 18.45 local time on Friday 16 October.