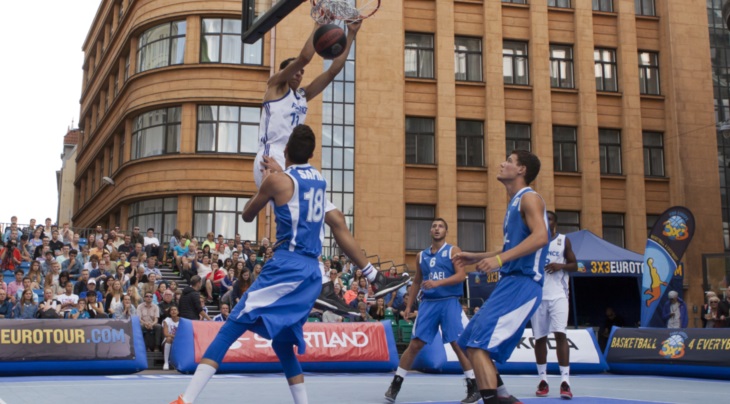 Under a giant permanent tent right by the Palace of Sport in the heart of the Eastern European Metropolis, a total of 32 teams will play for glory and the right to take home the first ever FIBA 3x3 U18 European Champion’s title.

Four groups of four in both the women's and men's competitions will commence the three-day tournament, with only two of them walking away with the trophy.

We break down the first round pools and highlight some of the players to watch over the next days.

Women's
Pool A: Belarus - Estonia - Hungary - Romania
Hosts Belarus, newcomers to the 3x3 scene, face tough opposition in both Hungary and Romania. Hungary's Nina Aho, a participant of the Youth Olympic Games, is already a star in the scene, leading her team to third spot in the U18 World Championships on home soil, earlier this year.

Romania can count on the Youth Olympics experience of the dynamic duo of Andreea Cretu and Ana Ferariu.

Pool B: Germany - Israel - Lithuania - Netherlands
In a tough to predict group, all teams will be hoping to make the next round, with Israel maybe slightly on the forefoot. Yaara Yizchaki can light up the scoreboard for the Israelis, who were a surprise guest to the semi-finals of the U18 World Championships last June.

The Netherlands will attempt their mission with a team that looks entirely different than the four that played in Hungary.

Pool C: Czech Republic - France - Poland - Russia
The Czechs, winners of the Riga qualifier, will again need to bring their A game facing an athletic French side, led by the explosive whirlwind Amandine Toi.

Poland, with the World Championships experience of Marta Marcinkowska and Alicja Szloser, will not want to make up the numbers while Russia are usually tough customers themselves.

Spain's Lucia Alonso won the silver medal at the Shoot-Out Contest at the World Championships, underlining her shooting proficiency, something her team will surely value.

Men's
Pool A: Armenia - Belgium - Italy - Latvia
For Armenia, just participating in the Final Round of the European Championships could be considered a success. The Armenians will like their chances of sneaking out of a strong group however, having proven at the qualifier in Riga, that they are right there with the Latvians.

Belgium#s Sigfredo Casero Ortiz, a standout for his country at 5 on 5 level at the U18 European Championship earlier this summer, is the main reason his side can be considered favourites in this pool. The energetic Italian squad, led by Matteo Maruca and Daniel Perez, two players with real highlight potential, will surely have a different opinion though.

Pool B: Denmark - France - Lithuania - Poland
The traditionally athletic French side, led by Valentin Chery and 1998-born Timothe Vergiat looks like the team to beat in this pool, especially after finishing third at the World Championships.

Both Lithuania, who are led by Arnoldas Januska and Poland, who rely on the dangerous drives of Szymon Ryzek will have their mind set to qualifying while Denmark, who sealed their place in Minsk with a fifth place finish in Riga will look for one of the other upset.

Pool C: The Former Yugoslav Republic of Macedonia (MKD) - Germany - Russia - Spain
Germany, paced by guard Rupert Hennen, where not shy of announcing their ambitions in the tournament. They will have to walk the talk against convincing Amsterdam qualifier winners MKD. Forward Elvis Hot is the first option of the Balkan side, who started slow in Amsterdam but later rolled to a dominant win.

Slasher Nil Bria Mendez and Spain looked confident throughout practice and will not go away without a fight and same could be said about Russia. Those two teams finished 4th and 5th in Hungary and have only made one change to their roster. This will likely be the toughest pool in the draw.

Pool D: Belarus - Georgia - Israel - Turkey
Just like on the women's side of the draw, hosts Belarus are new to the scene and will count on the support of the home crowd to go far in the tournament. They meet Riga winners Israel, who are battling injury woes, Georgia and Turkey.

Turkey can count on the strong frames of both Türkay Berutcoglu and Bahadir Simsek while Georgia's main option is the shooting prowess of Kote Bitsadze.

All games played on the main court will be livestreamed on youtube.com/FIBA3x3 from 16.00 local time (GMT+3).