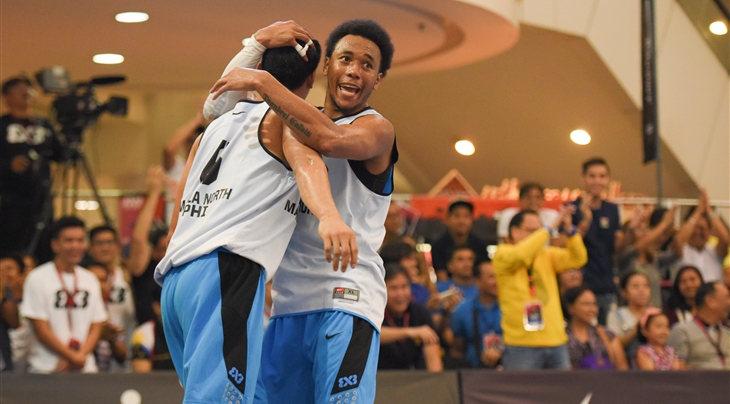 Number one 3x3 player in the Philippines Terrence Romeo had told he was "super motivated to defend his title" and he proved it on the court with a tournament-high 20 points and countless ankle-breakers. In their last game, his Manila West had to crush the hopes of Manila South, a third Filipino team composed of U18 players. They topped Pool D.

Unlike Romeo, PBA star Calvin Abueva had a bittersweet memory of the Manila Masters last year, losing as soon as the quarter-finals against Doha. With new additions Karl Dehesa and rising star Troy Rosario, his Manila North team won two thrillers against Beirut first and then an amazing come-back win against 2013 FIBA 3x3 World Tour winners Team Ljubljana in Pool B.

World Tour reigning champs Novi Sad Al Wahda were also dominant in Pool A, conceding just 14 points on the day with Dejan Majstorovic and number one 3x3 player in the world Dusan Domovic Bulut sharing the workload (16 and 15 points).

In Pool C, Team Doha finished both games before the 10-minute limit and wowed the crowd with both Dominic James and Sammy Monroe seriously testing the rims.

The action resumes at 13.30 local time (GMT+8) tomorrow with the PLDT Shoot-Out Contest followed by the quarter-finals.

Team Kobe’s Nyika Williams showed at the SMART Dunk Contest Qualifier he could be a threat for the world’s shortest professional dunker Porter Maberry.