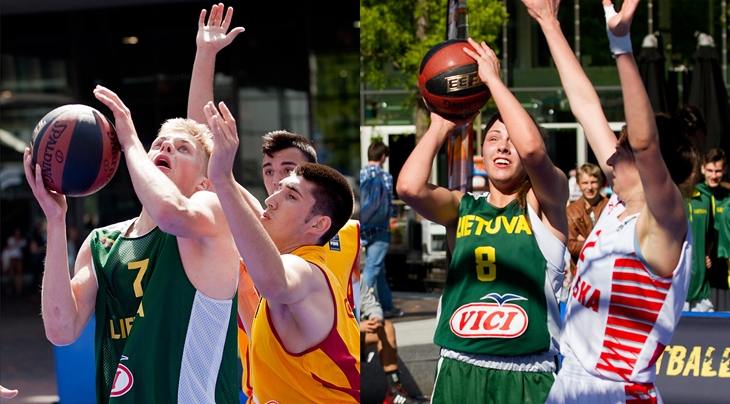 Lithuania's women avenged their absence from the 2015 FIBA 3x3 U18 World Championships by winning the Amsterdam Qualifier beating several teams who had starred at the event, including Israel (who finished fourth in Debrecen). The seven teams competed in Amsterdam in one pool with the top two playing a final (where Lithuania beat Poland 8-5) and the top five (Lithuania, Poland, Israel, Netherlands and Estonia) making it to the 2015 FIBA 3x3 U18 European Championships in Minsk on 21-23 August 2015. Wales and Andorra failed to qualify.

Lithuania's men confirmed their fine outing in Debrecen (sixth-place) by reaching the final, taking a big lead in the final against The Former Yougoslav Republic of Macedonia (MKD) before collapsing in the final minutes. It was a convincing 3x3 debut for MKD who bounced back from a slow start on Saturday (with losses against Netherlands, Lithuania and Czech Republic) to a perfect sweep of Germany, Belgium and Lithuania on Sunday. Of the nine teams featuring in Amsterdam and split into 2 pools, the top five (MKD, Lithuania, Russia, Belgium and Germany) stamped their ticket to Minsk. It is already game over for the other four teams: Czech Republic, Netherlands, Andorra and Wales.

The event took place just outside the Amsterdam Bijlmer ArenA, the train station situated nearby the famous Ajax Amsterdam’s home ground. The venue also hosted the final of the Dutch 3x3 Quest (the Streetball Masters), which stormed the country in the last months. One of the highlights of Sunday was the dunk contest starring the world’s shortest pro dunker Porter Maberry (1.68m) and future winner Kristaps ‘Latvian Sensation’ Dargais who shut down the event with his signature dunk under both legs.

The dunk contest and the games can be relived on the official FIBA 3x3 YouTube channel. The dunk contest highlights and an event video recap will be available on the channel next week.

The next two FIBA 3x3 U18 European Qualifiers will be staged in Riccione, Italy on 24-26 July and Riga, Latvia on 1-2 August.