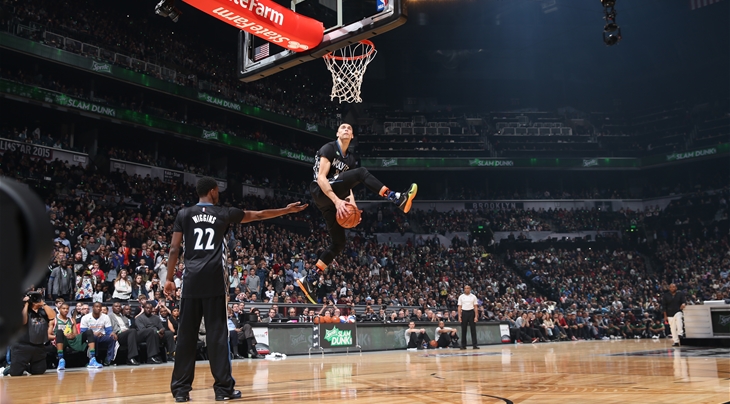 The rookie impressed the fan but did he also make an impression among his peers? We asked the best professional dunkers in the world from the "Dunk Elite" crew, who feature at the FIBA 3x3 World Tour to find out if his success was unanimous.

"It was definitely one of the best dunk performances in NBA history," admitted Kristaps Dargais, winner of the Manila Masters dunk contest in 2014.

"LaVine proved that he has what it takes to be a professional dunker."

"I was impressed how easily he finished his dunks but I wasn't jumping out of my seat to be honest. The dunks he did have been done for yeeears in our world," the Latvian added.

Just like LaVine, Dargais recently added the behind-the-back dunk to his collection. Only he would do it with a full 360 degree revolution (#5 in Top 10 above).

Dmitry Krivenko aka "Smoove" also masters the behind-the-back jam but he does it after flipping the ball above his head (#7 in Top 10 above). The Ukranian dunker and freestyler still liked what he saw from the teenager and offered a special training for the next edition.

His first round dunks were amazing. - Krivenko

"Zach showed us some high level dunks with good style, elevation and great clean execution. I'm not talking about the degree of difficulty because these dunks are really common in one-foot-dunkers' arsenal but the perfect execution," added Smoove who did a similar off-the-backboard between-the-legs dunk last September… with an additional 180 degree spin (#4 in Top 10 above).

"I think that if a guy like him could work out with Dunk Elite, he would reach his full potential pretty quickly."

Three-time FIBA 3x3 World Tour Dunk Contest winner Rafal "Lipek" Lipinski said this is what he had been waiting for years: "The behind-the-back dunk and [Victor Oladipo's] 360 degree reverse had us all on the edge of our seats," the Pole confessed.

Needless to say it takes a lot to impress a guy who dunks between the legs… over his opponents in contests like he did at the Rio Masters last season and the 23-year-old is still hoping for an opportunity "to be able to go against these guys!"

Jordan Kilganon became a YouTube sensation two months ago when he posted online the videos of a brand-new slam, the Scorpion Dunk (#1 in Top 10 above), head on the rim and right arm elevating like a Scorpion tail and hammering down the ball without looking at the rim. The Canadian was another victim of "LaVineSanity".

I've had plenty of people tell me I would have easily won that contest. - Kilganon

"The dude is 19-years-old! The second he hit his first 180 [degree] eastbay we all knew it was over. I was very impressed with the way he executed. I was really hoping to see his free-throw line windmill but hopefully he is saving it for next year!" declared the man known as "Mission Impossible".

And if you don't believe him, check out some of these videos and make sure you follow the next FIBA 3x3 World Tour events.