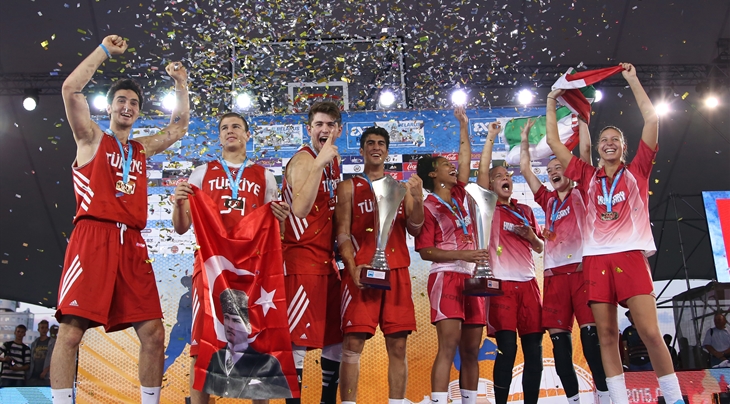 Hungary defeated hosts Belarus 16-15 in an exciting final, which went to overtime in front of a 1,200 strong crowd at the Sports Palace in the centre of Belarus' capital city.

Bronze went to Israel, who squeezed past France 16-12, having displayed fighting and team spirit throughout the entire tournament.

In the Men's Competition, Turkey beat France 16-14 in an intense match-up celebrating on the centre court until the arena was already emptied long after the ceremony.

Spain, thanks to a game-winning desperation two-pointer by Guillem Jou, stunned hosts Belarus 18-15 to walk away with a bronze medal.

More medals were given during the Championships in three individual contests.

The full report for the individual contests can be found here.

We break down all the action of Day 3 with a total of eight games being played on the main court.

WOMEN
Semi-Finals
Belarus opened proceedings against Israel and wasted no time, jumping out to an early 6-2 lead that forced Israel to call a time-out.

Anastasiya Sushchyk added to Israel's woes with a long-range make, as Belarus kept pushing the tempo and aggressively attacking the basket.

At 12-4 with 3:40 to play, Israel needed at least a complete turnaround but having already reached the team foul limit that mountain proved to high too climb.

Belarus smartly brought home a 19-12 win that placed them in the final and made the crowd explode once more.

France wanted to repeat the men's team achievement of making the final, but quickly found themselves on the wrong end of a 6-3 lead as Nina Aho put Hungary in front.

Amandine Toi with a long-range shot and Alexandrine Obouh Fégué made it a tied ballgame at 9-9 only for Hungary to immediately re-take the lead at 11-9 heading into the last two minutes.

Hungary locked down the French from then on, also controlling the rebound for a celebrated 14-9 success.

Bronze Medal Game
Israel coped better with the frustration of missing out on the Final, taking a 5-2 lead that was immediately answered by a corner-two-pointer by Amandine Toi to make it 5-4.

When Eden Rotberg scored a two-pointer and Lior Halevi followed up with a lay-up the Israeli lead had again ballooned to 10-6 with four minutes to play.

Both teams traded blows, but the lead was still four, 14-10, with 2 minutes to play as Toi forced the ball in on a drive, also converting the and-one play, giving France some hope at 14-12.

Rotberg replied with two scores herself to secure the bronze medal for her side, 16-12 for Israel.

Final
In the replay of the opening game in Minsk, in which Belarus had beaten Hungary on Friday, both teams took the court with gold on their minds.

Neither team was able to open a bigger lead in the opening minutes, until Nina Aho and Tímea Tóth made it 10-7 for Hungary.

Hanna Lapo replied with an and-one play to keep the hosts in striking distance at 10-9.

Hungary were leading 14-12 heading into the final minute but Maria Adashchyk tied things up from downtown, 14 apiece and with neither team able to score, the game went into overtime.

Lapo scored the first point but it was Nina Aho who emerged as the hero as the Hungarian guard calmly sank a two-pointer to give Hungary the 16-15 win.

MEN
Semi-Finals
Belarus and France both found it difficult to get a basket early on in their Semi-Final.

A lack of rebounding, previously a strength of the Belarusian team, cost them dearly.

Spain wasted no time against Turkey, opening a quick 3-0 lead after one minute.

Turkey found the right answer, tying things up at 5-5 with a two-pointer by Türkay Barutçuoğlu.

Tanalp Şengün then gave Turkey their first lead with another long distance shot, 9-7.

Turkey hung onto that lead until the final minute, Eduardo Pérez was awarded two free-throws at 12-10 for Turkey.

The forward missed the first and with only a few seconds to play, Spain could not get possession as Turkey celebrated a narrow 12-11 triumph.

Bronze Medal Game
Spain stormed out of the gates against Belarus, taking a 5-0 lead that Belarus kept chasing until two free throws by Maxim Liutych made it 12-14, giving the hosts some hope with 1:12 to play.

Anton Zaretski tied things up at 14 with a step-back two-pointer, before the teams traded baskets and had to go into overtime to determine the winner.

Spain drew first blood in OT and with Belarus unable to answer, Guillem Jou ended up with the ball in his hands and the clock ticking down.

Guarded by two opponents, Jou sent a prayer and threw a desperation attempt which fell in, giving Spain an 18-15 triumph.

Final
Both France and Turkey were determined to win gold and it showed in a tough game in which the teams traded blows from the start, Turkey slightly on the forefoot thanks to controlling the boards.

Big man Quentin Goulmy tied things up with a two at 8 apiece only for Tanalp Şengün to connect on an and-one play and bring Turkey back up again.

Goulmy gave France 14-13 lead scoring his bonus free-throw with two minutes to play but France hit the team foul limit and Mert Başdan made one to tie scores.

Sengün got fouled and made one from the charity stripe and then followed with a drive to put Turkey up 16-14 with 14 seconds to play, sealing the win for joyous Turkey.