Home, Sweet Home for Belarus on Day 1 of FIBA 3x3 U18 European Championships 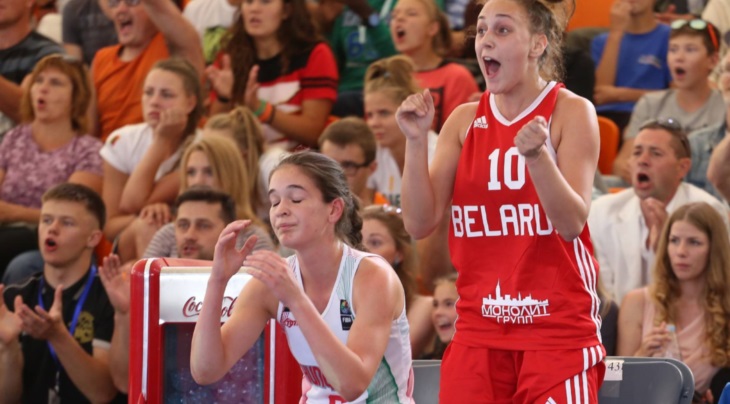 Home support had been fantastic for both sides throughout the day with raucous crowds seemingly energizing the young athletes.

In the women's draw, Spain and Belgium took their game to the wire, both taking the lead several times before seeing the encounter going into overtime.

Nora O'Sullivan turned into the tragic hero, having a chance to seal the deal with two free-throws in OT but missing the first and after a couple of scoreless possessions, it was Paula Ginzo who nailed a shot from long range to give Spain a 14-13 win.

On the men's side of the competition, Armenia had led Latvia 13-9 before the Baltic side started a furious comeback, sending the game into overtime, tied at 13 apiece.

Latvia's Toms Upe emerged as the game hero, nailing a two-pointer from deep to end OT, 15-13 for Latvia.

Israel's Michael Moshkovitz drilled a crazy two-pointer with only five seconds to play against hosts Belarus in the final game of the night, but Belarus did not lose their composure and held their nerve to score the two points needed to make it 21-19 and the partisan crowd in Minsk erupt in joy.

The win puts the home team through to the Quarter-Finals even before their meeting with Turkey for top spot in Pool D on Saturday.

Belarus opened the day with a bang, defeating highly rated Hungary 15-7 thanks to their gritty defense, making the home crowd roar right from the start.

Anastasia Sushchyk might be one of the smallest players in the competition but the Belorussian fan favorite showed that height is not everything, dropping 5 points on the Hungarians and coming up with more than one good play on defense.

The hosts added a second success to their tally, easily seeing off Estonia 21-4 for a clean-sweep day one finish.

Romania defied height and their young age, squeezing past Estonia 14-13.

Hungary showed up with a vengeance for their second game and rolled past Romania 21-8.

Germany jumped out to an early four-point lead against Israel but the Israelis clawed their way back into the game, closing the gap with a two-pointer in the final minute and finishing off their opponents with a lay-up with under 8 seconds to play, 13-12.

The greens from Lithuania enjoyed a solid start, keeping the Netherlands on distance down the stretch for a 13-9 victory.

Germany bounced back against Lithuania, securing a 14-11 win in a nervous encounter.

With Netherlands rebounding from their opening loss and beating Israel 13-8, Pool B is now wide open with all teams tied at 1-1 and the winners of the last two games on Saturday securing a Quarter-Final berth.

The re-match of the Riga qualifier final between Czech Republic and France went exactly like the last meeting as the Czechs won a low-scoring encounter 12-7.

France, however, proved too strong for the Poles, locking down their opponents for a 13-6 win.

Those who thought the Czechs would easily do away with Russia were surprised by a Russian team that played solid defense and was challenging the Czechs until the final minute, before falling 13-8.

Spain made light work of Slovakia with a 17-7 win, riding the seven point tally of Naira Cáceres Martell to victory.

Belgium wasted no time in their game with Italy, racing out to an early lead before cruising to a 15-8 win.

The Italians bounced back against Slovakia though, battling through injuries to both Beatrice Olajide and Maria Chiara Ortolani to come out on top 18-13.

Belgium held off a resilient Italy, who refused to go away 18-16. The Azzurri missed three two-pointers that would have tied the game in the dying seconds of the game.

Armenia, supported by a good number of fans, took Belgium to the wire, but the Belgians, led by the explosive Sigfredo Casero Ortiz hung on to a 21-18 win.

Latvia, eager to follow up the opening win against Armenia took on Italy with the Azzurri leading by a slim margin for the entire game. Latvia needed to foul to get the ball back on the last possession and the Italians missed both free-throws but with only two seconds on the clock, the Latvians could not convert their desperation two-pointer, falling 13-15.

Lithuania left it late, but two shots from behind the arc in the final minute allowed them to see out a battling Polish squad 15-11.

France used their athleticism to dominate Denmark in a one-sided encounter, 21-11.

The French entered their game with Lithuania full of confidence, consequently opening a small lead but the Baltic side clawed their way back, Augustas Zilinskas knocking down a long-range bomb to tie things at 17.

Sarunas Tolocka then got fouled on the last possession of the game, calmly sinking the decisive free-throw to give his side a celebrated 18-17 win.

The Danes showed up much improved from their game and gave it a real fight against Poland, still falling 16-19.

Spain looked dominant early on, putting the shackles on the Former Yugoslav Republic of Macedonia (MKD), not giving up a point in the first five minutes of the encounter and rolling to a 19-13 win.

Germany showed their offensive prowess in seeing off Russia 19-12 thanks to dominant displays by both Lucien Schmikale and Rupert Hennen who hurt the Russians with a fine balance of shooting and attacking the rim.

Russia quickly recovered from their opening loss to Germany, handing Spain a 17-10 defeat behind some physical play that the Spaniards were not able to match.

In the pool's last game of the day, MKD showed they are very much alive, beating Germany 18-13, creating an exciting situation for day two with all teams still in contention.

Home side Belarus took the stage against Georgia and could really use the capacity crowd that seemingly gave them a boost for a 19-10 win that felt much more difficult than the final score suggests.

Timophei Paraliou moved the spectators to their feet with two spectacular dunks late in the game.

In a real nail-biter, Turkey squeezed past Israel for a 19-18 win largely thanks to the eight points by Tanalp Şengün.

The Turks followed up with a 19-11 pummeling of Georgia that puts the Georgian out of contention for a spot in the quarters.

Find all standings and results on 3x3planet.com