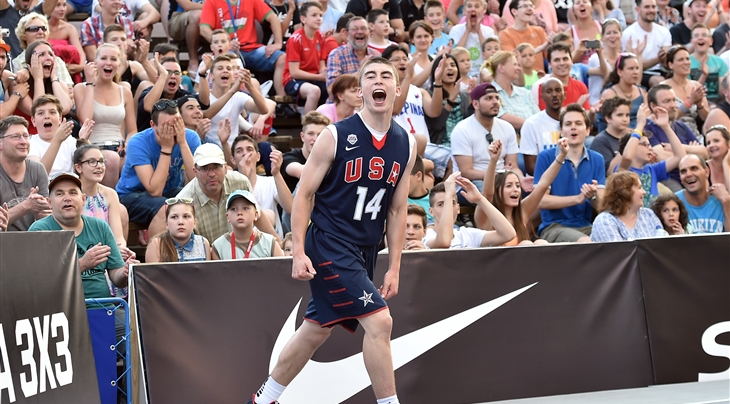 France started the day with gold as the speedy Lisa Berkani triumphed in the Skills Contest. She dominated the Czech Michaela Matuskova in the final. Luana Rodefeld collected bronze for Germany.

France's men team continued its perfect run with back-to-back wins against Estonia (16-14) and Egypt (19-8) but will face their toughest challenge so far with USA in the quarter-finals.

The US team lost their second over-time game in two days against Spain but were unstoppable in the Last 16 match against Poland (22-6). Payton Pritchard caught fire scoring 19 points, including a whopping nine shots from behind the arc. The 1.86m sharpshooter now ranks second among scorers (and first among players still active in the competition).

The women's team also beat Poland but in a less dominating manner (15-12). Reigning champ Arike Ogunbowale continued led the team and now stands third in the scoring charts (and also first among players still active in the competition). Next stop on her road to win a historic third straight 3x3 U18 international event is Belgium, who upset Spain, the 2013 bronze medallists.

The other quarter-finals include a game between the crowd-favourites from Hungary, set to meet Italy and surprise guests Israel - who defeated Czech Republic - against China.

In the men's tournament, Russia will meet New Zealand in a battle of the big men between Edvard Sharnin and 4th top scorer Tai Wynyard.

Additionally Spain will meet Romania and Lithuania and Argentina will play a rematch of the 2013 FIBA 3x3 U18 World Championships semi-finals. Argentina had prevailed, en route to a gold medal.

All games played on the Main Court will be available on a free livestream on youtube.com/FIBA3x3.

The Dunk Contest Qualifiers were also staged on Day 3 and saw reigning dunk champ Kobe Paras from the Phlippines stand out with a massive windmill and a dunk over two team-mates.  Mark Boros (Hungary), Agustin Da Costa (Uruguay) and Jalek Felton (USA) will join him in the final on Day 4.