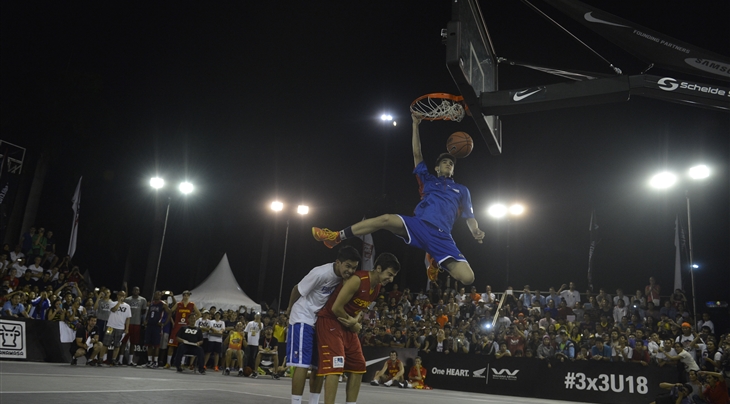 MIES (3x3) - The 2013 FIBA 3x3 U18 World Championships Honda Dunk Contest video quickly became the most viewed video ever on 3x3 basketball's official YouTube channel. Yes the dunks were nice but foremost it had all the ingredients of a fairy tale with the youngest player in the whole tournament, 16-year-old Kobe Paras from the Philippines, winning against all odds versus the taller, stronger and older Antonio Morales (18) from Spain and Demonte Flannigan from USA.

The video material was used in several TV shows in the Philippines and proved very successful on YouTube too. Paras' growing popularity and news that he would join the prestigious University of UCLA in the summer of 2016 brought new life to the video and it topped 2 million views on 7 March.

To celebrate the occasion, FIBA has published a new Kobe Paras video including a previously unreleased interview, which features the then 16-year-old player talking about his roots, his desire to follow his own route and his dream to play for the Philippines senior national team.

Besides the dunks he showcased in the Honda Dunk Contest final, the video includes dunks in practice and in the qualifying round. It also includes an interview of new Philippines international Thirdy Ravenna, discussing his team-mate.

Paras is eligible to play at the upcoming 2015 FIBA 3x3 U18 World Championships, which will be held in Debrecen, Hungary on 4-7 June.

Registration of players from the 48 teams (24 men, 24 women) by the 36 participating national federations opens on 1 April. This process will close and be made official on 4 May.