FIBA 3x3 Advisory Board discuss professionalisation and nominations in Doha 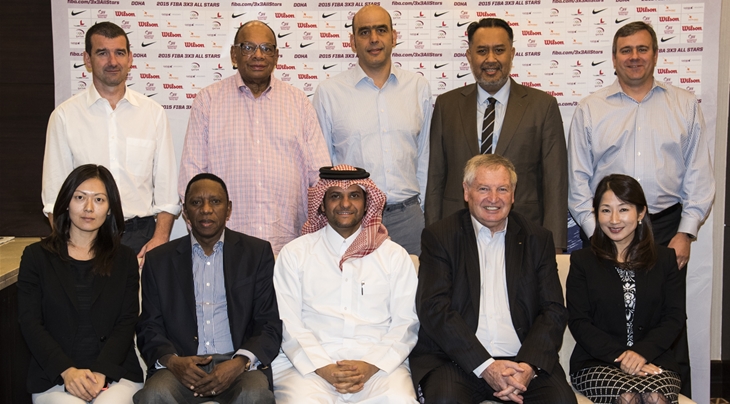 DOHA (3x3) - The FIBA 3x3 Advisory Board met prior to the FIBA 3x3 All Stars in Doha on 11 December 2015 for the third time and provided among other things recommendations on the professionalisation of the game  and made official a number of nominations.

Formed on 9 September 2014, the FIBA 3x3 Advisory Board is chaired by FIBA Honorary President Yvan Mainini, while Qatar Basketball Federation (QBF) President H.E. Sheikh Saoud Bin Abdulrahman Al-Thani is the vice-chairman. Thanks to the diverse background of its various members, it provides FIBA with strategic advice.

During its 11 December session, the FIBA 3x3 Advisory Board invited several 3x3 players for a round table about how to tackle the professionalisation of 3x3 and identify new creative ways to help players become fully dedicated 3x3 players. It also discussed the development of the 3x3 season and welcomed the creation of professional 3x3 leagues such as Xebio's EXE Premier League in Japan.

Aspetar, Qatar's first specialised Orthopaedic and Sports Medicine Hospital, presented to the Board the progress in the study done in cooperation with FIBA's Medical Commission about measuring and analysing the physical requirements and needs of 3x3 players. They will come up with recommendations in order to improve fitness conditions and reduce risk of injury.

Sport Arena - one of the most successful 3x3 organisers in the world which has been involved in several FIBA 3x3 official competitions including the 2015 FIBA 3x3 World Tour Final - were named Representative for FIBA 3x3 promoters. Sport Arena will be asked to convey the demands of organisers worldwide and will be regularly consulted so that private promoters' needs are taken into consideration in the development of FIBA's urban discipline.