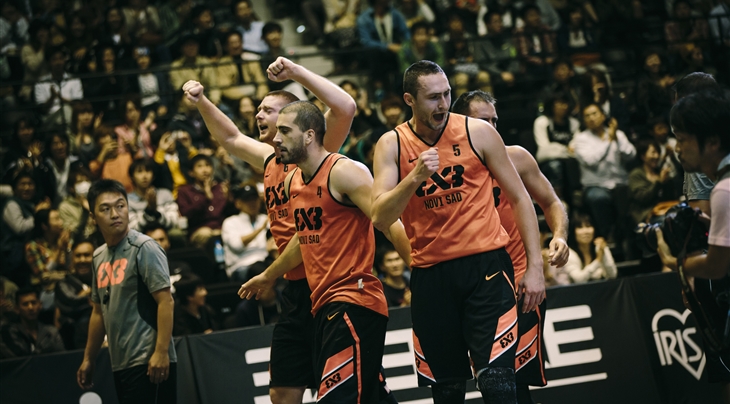 Many things happened since Dusan Domovic Bulut hit his game-winner against Saskatoon in Tokyo in the 2014 World Tour Final. He did not write as many columns on FIBA.com as expected. The number one 3x3 player in the world was busy finding more sponsors and clinching a spot to this year’s edition of the World Tour. Unlike last year, teams are able to qualify to each one of the six Masters tournaments, in Manila (1-2 August), Prague (8-9 August), Beijing (15-16 August), Lausanne (28-29 August), Mexico City (9-10 September) and Rio de Janeiro (26-27 September) to earn a ticket to the Final in Abu Dhabi (15-16 October).

His Novi Sad team (now known as NoviSad AlWahda) won the Abu Dhabi 3x3 Quest and the Abu Dhabi 3x3 Challenger, meaning the reigning champs will for sure play in at least 2 Masters this season, Beijing and Manila. And they are looking for more: the team is now coveting a ticket to the Prague Masters at the Decathlon B33 Quest in Hungary on 20 June and later at the Moscow Open Challenger on 24-25 July.

Novi Sad are not the only former winners to have guaranteed their presence at the World Tour this year. The season started with an announcement from the 2013 winners that the team would split up with former number one player in the world Blaz 'Birdman' Cresnar and Rok Smaka playing as Team Maribor and Jasmin Hercegovac and Ales Kunc continuing as Team Ljubljana. The latter travelled all the way to Singapore to stamp their ticket to the Manila Masters. They will chase a trip to the Prague Masters on 20 June in Hungary and 21 June at the GAME Copenhagen Challenger… and both times will find Team Maribor on the way…

Speaking of former winners, the season started on a sad note with the tragic news that 2012 (and inaugural) World Tour winners Team San Juan (PUR) had lost Andy ‘Corky’ Ortiz Jr in a car accident. It is not known yet if his former team-mates will reunite (after a break in 2014) to try to win a second title in his memory.

A total of 11 teams have already earned their ticket to the World Tour and – like NoviSad AlWahda – Team Doha (QAT) also made sure they would make at least two appearances. Number 10 player in the world (and 2014 FIBA 3x3 World Champ representing Qatar) Yaseen Musa built a brand new team around him, including 2011 NBA draft pick Tanguy Ngombo. Team Doha will also feature both at the Manila and the Beijing Masters.

Six teams are already known for the first Masters of the season. Besides NoviSad AlWahda, Ljubljana and Doha, Team Auckland (NZL) are making their return to Manila, led by number one player in the country Patrich Bolstad. Kenji Hilke and Keishiro Tsutsumi are also making a come-back with a new-look and more ambitious Saitama (JPN) team. Team Yogyakarta (INA) will also compete in the Filipino capital.

Four teams have clinched a spot in the Beijing Masters. On top of NoviSad AlWahda and Doha, the iconic Jakarta team (INA), winner of the 2013 Tokyo Masters, will make their third straight appearance in the competition. It will be a first time for the young Indian team from Chandigarh (19 years on average).

Three more teams have confirmed their participation: NY Queens (USA) in Mexico plus Montevideo (URU) and Esmeraldas (ECU) in Rio.

So far none of the teams are known for the European Masters in Prague and Lausanne but this will change very soon with 4 (!) Prague qualifiers held on the weekend of 20-21 August. On the same weekend, 2 more teams will have a chance to earn a ticket to the Mexico Masters.