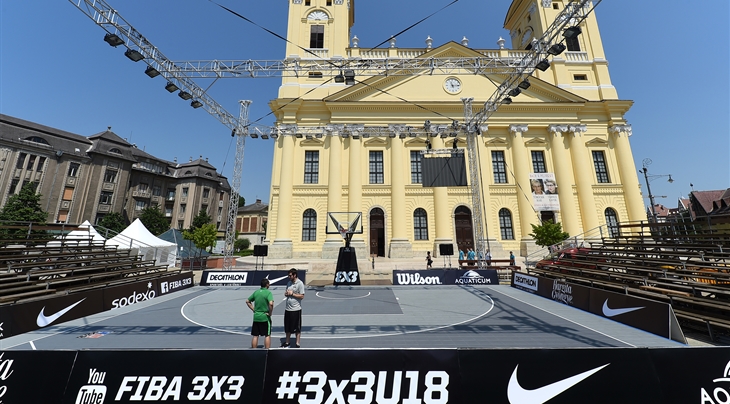 DEBRECEN (3x3) - All the future stars of 3x3 basketball are here in Debrecen, the second-largest city in Hungary for the fourth edition of the FIBA 3x3 U18 World Championships from Thursday 4 to Sunday 7 June. The local crowd cannot help but notice as the iconic Kossuth Square with the city landmark, the Reformed Great Church, has become a vast 3x3 playground.

Like every FIBA 3x3 World Championships, the competition will feature men's events as well as women's events. A total of 48 teams (24 men's and 24 women's) from 34 countries will compete in Hungary for a chance to win one of the five world titles.

On top of the men's and women's tournaments, the 3x3 players will also feature in three individual contests, such as the Shoot-Out Contest (mixed), the Skills contest (women) and the highly-anticipated Dunk Contest.

Two years ago in Jakarta, the youngest player in the tournament, Kobe Paras, became a national hero by winning gold for the Philippines. He is back this year and along with Jalek Felton (USA), Killian Tillie (France) or Tai Wynyard (New Zealand) will be among the men to watch in Debrecen.

In the women's tournament, Arike Ogunbowale (USA) has a chance to win a historic third gold medal in a 3x3 world event. Dilixiati Dilana (China), Petra Holesinska (Czech Republic) and Nina Aho (Hungary) are expected to make some noise.

Aho - who is the number one 3x3 U18 woman in the world - and her team will play the opening game in front of their local fans against Slovakia at 15.30 local/CET time (GMT+2). They will be one of the main competition for the US, who have won the last two editions of the FIBA 3x3 U18 World Championships.

The men's event will start at 16.30 local time with the hosts facing Russia. Argentina are the reigning champions but will face a true challenge with 2013 runners-up France, 2012 runners-up USA and 2011 winners New Zealand.

All games played on the Main Court will be available on our free livestream on FIBA 3x3’s official YouTube channel: www.youtube.com/FIBA3x3.