Bulut: "We will do whatever it takes to win in Manila" 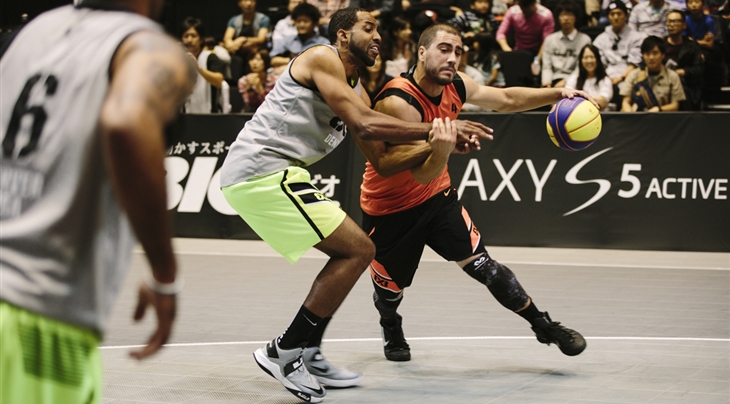 MANILA (2015 FIBA 3x3 World Tour) - Number one 3x3 player in the world and FIBA 3x3 World Tour reigning champion Dusan Domovic Bulut (Novi Sad Al Wahda) talked about his excitement to start the event in Manila, spoke about his old rivals who will also play in the Philippines and confessed his team is ready to adapt to any style of play to secure the title on 1-2 August, in the Robinsons Place shopping mall.

FIBA.com/3x3WorldTour: The World Tour starts in a few days. How excited are you?
Dusan Domovic Bulut: We're super excited because it's the start of the World Tour first of all but also because we heard a lot of good stories about Filipinos and their passion for basketball and 3x3. We saw the videos of the games played in the shopping mall last year so we’re very excited to come out here and play for the Filipino fans.

FIBA.com/3x3WorldTour: Last time we saw you play, you sustained a shoulder injury in the semi-finals of the European Games [in Baku, Azerbaijan on 26 June]. How do you feel now?
Bulut: I'm not 100 percent but I can play. I would play with one arm if I had to! I missed the Moscow Open [a FIBA 3x3 World Tour Prague Qualifier] last weekend because my team-mates told me to get healthy. I’m not 100% but I think I can contribute to my team with some level.

FIBA.com/3x3WorldTour: You already qualified for three World Tour Masters and earned a bronze medal at the European Games. It's been a good year so far?
Bulut: The beginning was super smooth. We won plenty of tournaments but then that semi-final loss in the European Games shook us a little bit. It's also a good thing that the guys lost in the quarter-finals in Moscow. You can't stay relaxed and win all the time. At the end of the day it's good that these losses and injuries happen before the World Tour because this is our highest goal.

FIBA.com/3x3WorldTour: You used to be a contender and now you're the reigning champs. What did that change for you?
Bulut: Nothing changed for us really. Maybe more opponents really want to beat us now. I think it's a mental thing. It did not change a thing for us. We're still coming here to prove to everyone we're the best and I know that if we play our best, we can beat anyone. We just have to stay focused.

FIBA.com/3x3WorldTour: Even though it's your first time in Manila, you will meet some pretty familiar faces, including your old rivals from Doha and Ljubljana. Can you say a few words about each team, starting with Doha and then Ljubljana?
Bulut: I'll start with Ljubljana if you don't mind. I have the greatest respect for this team. They were there before the World Tour was even launched. They're the godfathers of streetball. I used to watch them on some events and if it wasn't for them, my team may not exist. You can't have anything but respect for what they achieved and for being so professional at 40. It motivates every person. But on the court I don't like them. I don't like their style of play, trying to slow down the game, always talking to the referees. I don't like what they represent. They beat us twice in the final, at the World Tour and in the All Stars in 2014.

They [Team Ljubljana] took my pride and they took my money and now I want to beat them everytime. - Bulut

I want to make them feel how I felt.

It's the same thing with Doha. Yaseen Musa is a good guy and we always speak a lot when we meet but these guy took my gold medal [as Bulut represented Serbia in the final of the FIBA 3x3 World Championships in Moscow on 8 June 2014] so I look at them and want to beat them everytime.

FIBA.com/3x3WorldTour: For the Filipino fans that don't know you and your team very well just yet, what can they expect to see from you in Manila?
Bulut: The only thing they can count on is hustle. We will leave our guts on the floor. We can't promise we will win or play beautiful basketball. If our opponents don't let us play our usual type of fast-paced basketball then we won’t back off. We will do whatever it takes to win, that’s the only thing I can promise.