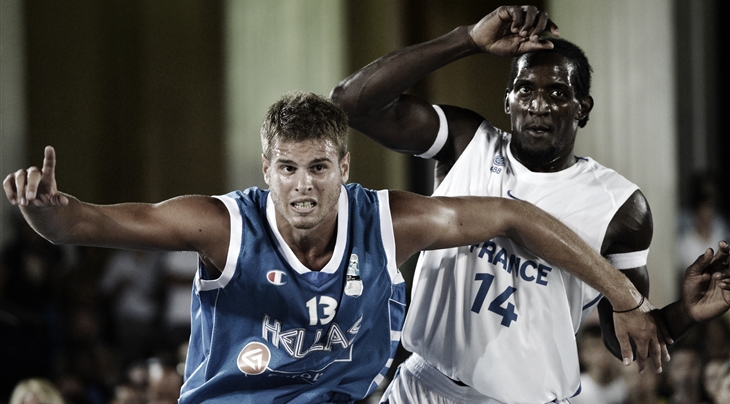 ANDORRA (Baku 2015 European Games) - Georgios Bogris already had his share of trophies in basketball with an U20 European Championship title in 2009 with Greece and plenty more at club level with Panathinaikos. Now, however, he is looking for more silverware in 3x3 basketball, the young urban discipline where he has been able to play with his friends in front of spectacular crowds.

Bogris, who plays for Spanish Liga Endesa club MoraBanc Andorra, knows that he has a disadvantage come the summer when he moves over to the 3x3 game.

"Other countries have players who do this for a living. They have more experience and know the rules better," said the 26-year-old.

But the Athens native expects he will one day become one of those 3x3 players.

"3x3 is a game that I really enjoy playing with my friends," he said

The 2.10m big man teamed up with long-time friends Nondas Papadoniou, Charalampos Giannopoulos and Euroleague sensation Nikos Pappas at the first-ever FIBA 3x3 World Championships in the streets of Athens on 23-26 August 2012. Despite tremendous support from the local crowd, Greece suffered a crushing one-point loss against France in the quarter-finals.

Two years later, at the inaugural FIBA 3x3 European Championships in Bucharest, Romania, Bogris and Papatoniou - along with Leonidas Kaselakis and Grigorios Rallotas - climbed one more step and reached the semi-finals, showing how much the competitive Bogris took 3x3 seriously.

"It is so important to me. I'm so proud every time that I wear my national team jersey in any competition," said the man known on Twitter as @bogrinho.

And come June, he is expected to represent Greece in 3x3 basketball at the Baku 2015 European Games.

"It is so important because people will know more about the game - that it is nice and easy to watch and understand. Through European competitions, the game will be more respected and more people will follow it," Bogris claimed.

"At every competition I have played in, the outside of the courts was full of people, and I can say for sure that they enjoyed it so much."

The player who is a favourite of female fans added: "For me, this sport will make a big difference when it becomes an Olympic sport."

Bogris intends to keep playing 3x3 when that happens.

"Then we can grow this game together."