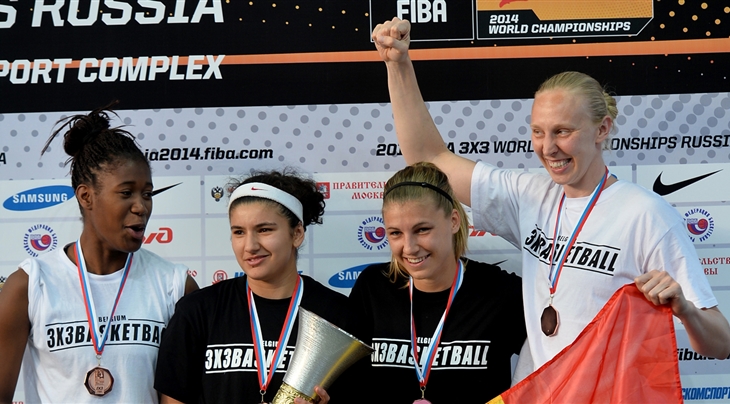 LA SEU D’URGELL (Baku 2015 European Games) - Hind Ben Abdelkader has already achieved a lot in her young career. But playing 3x3 basketball alongside the legendary Ann Wauters at the 2014 FIBA 3x3 World Championships is right up there on her list of accomplishments.

"Playing with Ann Wauters is an amazing opportunity that I have. I have the chance to learn everything I can from her," Ben Abdelkader told FIBA.com.

"She is a basketball legend who the world respects and has achieved so much in her career."

Ben Abdelkader teamed with the four-time Euroleague Women champion and five-time European Player of the Year Wauters as well as Sara Leemans and Stéphanie Medjo for the Belgium national team and finished third at the 2014 FIBA 3x3 Worlds in Moscow.

And the 19-year-old Ben Abdelkader is hoping that Wauters will play 3x3 again this summer at the Baku 2015 European Games.

"I think it is great that Ann is part of 3x3 basketball. We want to continue with the team that participated in the previous 3x3 event, so I believe she will be in Baku," said Ben Abdelkader, who is the number one ranked women’s 3x3 player in the world.

Wauters was actually not part of the Belgian team that finished third at the 2014 3x3 European Championships in Romania to secure a spot at Baku 2015, which runs from 12-28 June in the Azerbaijani capital.

Ben Abdelkader and Leemans reached the podium with An-Katrien Nauwelaers and Anne-Sophie Strubbe in Romania.

"We had great results the past year in 3x3, first at the world championships in Russia and then at the European Championships in Romania. I think we have built a team this past year with Sara Leemans, who is definitely the best player in the Belgian league, and Ann Wauters, who is a basketball legend. We really enjoy playing together and I believe that together we can do something great in Baku and play for a medal again," said Ben Abdelkader.

The Brussels native said that the European Games will be an important tournament for 3x3 basketball.